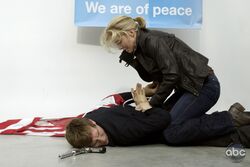 Anna is the first Visitor to receive a visa, followed by many others, including Lisa. Chad reports on the event. Protesters shout angrily outside. Haley reminds Chad that he helped make this happen, but he may have issues with that.

Erica sorts through the contact list of people who have rang the police about aliens. Jack comes to the door and Tyler lets him in before leaving again. Erica hands off her work to Jack after getting a call saying she has to protect the Vs from a death threat. Jack later discovers Georgie's identity.

Ryan walks Valerie to work since he's nervous about the Vs on the streets. Valerie questions why he looks nervous but he assures her that he would never want to keep secrets from her. Georgie then pulls up on a car to meet with him, once Valerie clears the scene. He's trying to lay low, since he's scared after the ambush. Ryan wants to mount a resistance, and has access to cash and people willing to join. Ryan tells him that John May He is part of the Fifth Column, the first resistance against the visitors.

Dale wakes up on the Mothership with amnesia. Joshua is assisting him, trying to draw out his memory. Joshua says that Erica's attack missed, since the Vs' hearts aren't in the same spot as in humans. When he realizes his facial flesh wound was pretty deep, he understands that his cover was blown but cannont remember who did it to him.

Tyler spots Lisa after dropping off Brandon at the Center, but she doesn't notice him. He doesn't want to get her in trouble, and leaves just as his mother appears. Erica is briefed on the potential assassin: late 20s, white male, and mentally unstable. Erica and Paul visit with the V security team. Everyone's paired up with a V partner. Erica protests, but eventually agrees. They visit the Surveillance Center, in a restricted zone, looking for a casual, ball-capped shooter. Across the hall, Erica notices a man entering another room and tries to memorize the code he puts into the alarm system.

Georgie's with Ryan, and he's unconvinced that Cyrus is going to be helpful. Ryan visits Cyrus and asks him to help him start a resistance again. Cyrus still has names, and Ryan's hoping to enlist. Cyrus attacks Ryan and tells him that has given up the Fifth Column in exchange for being reconnected. Ryan then attacks and presumably kills Cyrus, however.

Anna hosts a global teleconference with twenty-nine Mothership commanders in attendance. Popular opinion is very important, to stop the resistance before it starts. One person who can sway opinion is Mary Falkner. Mary Falkner is a leading figure in the protest movement, having become an activist after her husband, David, died when his F-16 crashed while investigating the New York Mothership. On six-day hunger strike, she reveals that 642 people died in accidents as a direct result of the visit.

Jack tracks down Georgie's residence, and sees newspaper clippings regarding his missing family. Georgie doesn't live here anymore, no one does, says the woman who's hiding in the back room.

Erica and her "partner" climb to a better vantage point, where she notices a guard missing below. He's suffered a blow and lost his jacket. Erica spots a suspicious individual dressed like a Visitor, heading into the building. Erica spots the gun just in time, saving Marcus from harm.

Brandon and Tyler head for Tyler's favorite pizza place. Lisa is sitting by herself in the corner and Brandon, pleased with the setup, ditches the couple. Lisa is still getting the hang of the Earth thing, and tells Tyler he's back in the Ambassador program.

The Vs take the prisoner, after exchanging unpleasantries. Paul tells Erica he'll meet her at the front of the building. She takes the hint, and a detour into the room she witnessed earlier. One monitor catches her attention, after it appears to have a countdown on it. She then notices a monitor with herself on it and notices that the camera is hidden in the V jacket hanging on the door.

Anna practices remorse, when Marcus interrupts her. Anna then travels to see Mary Faulkner and warmly ambushes her, offering her condolences, behind closed doors. Marcus later thanks Erica, extending his hand in a shake.

Joshua helps Dale visualize his old office, based on neuro-scans. Dale then remembers working there and soon remembers that Erica was the one who attacked him. Joshua then brings him back to the medical room and injects him with a needle. Dale then realises that Joshua is a member of the Fifth Column. Dale then finally dies.

Georgie's ambushes Jack from behind with a gun. The V scar shows he really was at the meeting, along with the Erica. Jack wants to come together, but Georgie reminds him that they always get crushed.

Mary takes the stage, in front of cameras. It appears she and Anna have publicly reconciled. Says Anna, the attempted assassin's goal was to kill peace.

Marcus visits Cyrus' dump, but he's been reduced to a pile of carbon. He then looks over to see John May graffiti written on the kitchen door.

Tyler shows Lisa his room and the two start to make out. Tyler then hears Erica arriving home so he takes off his V Peace Ambassador uniform and runs out to stop Erica entering the room. Erica hears shuffling coming from his room and walks in to see Lisa dressed in nothing but her underwear. Erica becomes flustered but eventually tells Tyler to take Lisa home and they will talk later.

Erica gives Jack the recap of the surveillance room when Georgie walks in and brings Ryan. Ryan then greets Erica and Jack.

Lisa returns home to the mothership and tells Anna that Tyler is the one they need to use. Anna then rubs Lisa's face in a loving way and Lisa addresses her as her mother.