"You really are a miracle, my child"-Anna 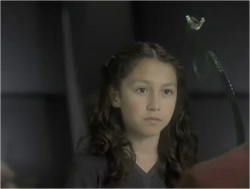 Amy was born to a Human mother and a Visitor father. Her mother Valerie Stevens was killed shortly after she was born while her father Ryan Nichols was forced to work for Anna with her life as the bargaining chip. Amy knows nothing of her unique heritage, let alone Anna was the one who took her birth mother's life. She has spent her entire short life on the New York Mothership. Anna gave Amy human skin so that she could use her to manipulate Ryan. Later, Joshua used Visitor Technology to rapidly age her. She was first aged to what would be a preschooler in human year and later a preteen. It's not known if she is aware she is half visitor and half human.

Because Visitor embryos require large amounts of phosphorus to gestate safely, Ryan had to steal phosphorus from the New York mothership. He succeeded due to Georgie Sutton's sacrifice and slips phosphorus into Val's tea. ("Welcome to the War") She eventually discovered what her daughter was ("We Can't Win") and went to the visitor healing center for help. However, she was about to be sedated by a Visitor Doctor, and the hybrid might have been killed, but Ryan was able to save them from him by knocking him out and giving him a suicide pill. Ryan then told her the truth, but Val truly didn't understand until she saw Visitor Attacker 1's skin. Val is now being hunted by V's. She, Ryan and Leah Pearlman then traveled to the Tompson house home to Henry Thompson and Susan Thompson, and is safe for a little while, but a solider soon finds them and kills Susan and Henry Thompson. Luckily Kyle Hobbes, Jack Landry and Erica Evans arrive and rescue the three. Kyle shoves an axe in Super Soldier Leah and Val then board a train and leave Ryan ("Heretic's Fork"). The hybrid protected and safe in Vals womb until Leah is knocked out. Val is kidnapped by visitor solider. Amy is then born aboard the NY Mothership. She is spared while her mother is killed by Anna. When Ryan arrives, Anna brings the hybrid crying in her hands, but it stopped crying when her father held her. Even though we do not see the hybrid's face, we see its scaly tail wrap around Ryan's thumb. ("Red Sky") She is then put into a giant tube of water so Anna could study her, making her develop the breeding plan. Ryan then sees her through the plexiglass, finaly revealing her face. She has the appearance of a Visitor, but the emotions of a human. Ryan is then taken back to Earth, separated from his child. ("Red Rain") Anna ordered skin to be put on Ryan's daughter as a means of manipulating him further. She also has her physicians devise a means of inflicting pain upon her that only bliss could relieve. She used both of these developments to manipulate Ryan into doing her bidding.("Serpent's Tooth") Ryan was reunited with his daughter several times as a reward for working for Anna. ("Laid Bare") ("Unholy Alliance") ("Siege") Because his daughter was dependent on bliss, he betrayed his own plan of killing Anna so his daughter wouldn't be in pain ("Concordia"); The hybrid respects Anna as her mother despite the fact Anna then ordered her men to experiment on her, making the disease go away. All she knew was that she was in pain and Anna healed her. ("Birth Pangs") Concerned over Lisa's suitability to be queen, Anna revealed to Joshua that she has saved a queen egg from her last clutch. She ordered him to begin experimenting with accelerated growth technology on the hybrid, in the hope that the same treatments can be used to make her own daughter mature faster. Though the experiments do work on the hybrid, they caused her to develop an immunity to bliss, though for obvious reasons neither Amy nor Ryan was told of this. Amy was not given a name until Anna, in an attempt to allay the fears of a specific Live Aboard, named her after the Live Aboard's mother, telling her that "Amy" was her own daughter, whom she kept secret from the public for security reasons. She then comforted Anna when she was feeling down, and revealed that she thought Anna was her mother. Marcus, secretly eavesdropping, was disturbed by this turn of events. ("Devil in a Blue Dress") During the Fifth Column's final assault on Anna, Amy was approached by Ryan, who hoped to spirit her away in the chaos. Believing the lies Anna told about him, she wrapped her tail around his neck and told him that Anna was her mother and she would stop him from hurting them. She then snapped Ryan's neck. When she saw Anna getting injured trying to bliss humanity, she took over. Unlike Anna, Amy succeeded ("Mother's Day")

Amy considers Anna as her mother, having never known Valerie. Her perceptions are also colored by the fact that Anna's bliss was the only thing that could take away her pain.

Amy seems to be aware that Ryan is her father, but was told that he abandoned her. Anna tricked Ryan into believing only her Bliss can help Amy and forced him to work for her in exchange for Amy's life. With the death of Valerie, Ryan's primary concern is protecting Amy from Anna. At one point, Amy wrapped her tail around Ryan's thumb and at certain points warned Ryan before her Bliss. Amy killed Ryan in order to protect Anna.

Retrieved from "https://v.fandom.com/wiki/Amy?oldid=13396"
Community content is available under CC-BY-SA unless otherwise noted.