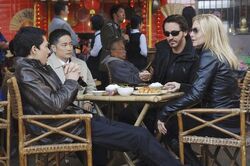 "Birth Pangs" is the seventh episode of Season 2 of V. Erica, seeking revenge against Anna, heads to Hong Kong to carry out a mission to strike a lethal blow against Anna. Meanwhile, Anna learns that Tyler's phosphorus level is too low - even after the Red Rain - and he might become useless to her; and Lisa and Diana bond, beginning to form an alliance against Anna.

Erica travels to Bangkok to meet with the international lieutenants of the Fifth Column. They do not readily accept her authority as leader, even though Eli Cohn passed the leadership to her before his death, and she needs to prove herself.

Erica then travels to Hong Kong to find Dr. Veena Rai, the doctor who looked after her during her pregnancy (who happens to be the same one who treated Eli Cohn's wife). Kyle and Erica break into Dr. Rai's highly-secure apartment to demand answers. However, Dr. Rai commits suicide rather than disclose information after Erica discovers that she is a Visitor. They discover documents that reveal some history of the breeding program, and discover that Tyler is one of 29 candidates for breeding, each in one of the 29 cities that the motherships are located.

Meanwhile, Joshua informs Anna that Tyler's phosphorus levels are still too low. Anna asks Joshua to try to increase Tyler's phosphorus, but also asks him to look for an alternative candidate for the breeding program. They find another boy, Raphael, who Anna asks Lisa to entertain, while Tyler is away for flight training.

Anna also reveals to Joshua that she has saved one last queen egg. This is her fail-safe, should Lisa prove to be disloyal. Joshua warns Anna that the new hatchling would need growth acceleration, but all their experiments to date have been failures. Anna then asks Joshua to experiment on Ryan's hybrid daughter. As a result of these experiments, however, the child heals itself of the pain that the Visitors put in her, removing her need for Anna's bliss.

Lisa meets up with Diana, who reminds her that Anna must never suspect anything and that she must not show emotions and not trust anyone. However, Lisa's feelings for Tyler get in the way, and she cannot bring herself to entertain Rafael. Anna suspects Lisa's allegiance and asks Joshua to test her.

Meanwhile, with the information gleaned from Hong Kong, Erica manages to persuade the Fifth Column lieutenants to back her. They intend to prevent the last group of live-aboards from ever arriving on the motherships.