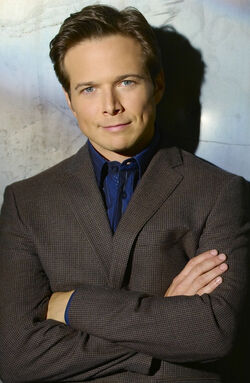 "You've trusted us with your career, and your health. Without us, you'd lose everything."

Chad Decker is an ambitious reporter, hungry to make a name for himself. Chad’s already precarious moral limits are stretched as he finds himself in the uncomfortable, yet highly beneficial position of becoming the conduit for Anna’s propaganda. Initially tolerant, yet aware, of Anna's expert manipulation of him to better portray the Visitors to the public, and also in line with their hostile beliefs about the Fifth Column, Chad eventually became aware of the Visitors true nature and plans for humanity, and so redeemed himself by joining the Fifth Column.

Chad is present among the press pool when Anna makes her first physical appearance. While other reporters question the scientific validity of some of the Visitors' claims, Chad discourages their badgering, and instead asks her about the Visitors' attractiveness. Later, Marcus approaches Chad about becoming the reporter to whom Anna grants her first on-board interview.

Immediately preceding the actual interview, Anna advises Chad not to ask anything that would paint the Visitors in a negative light, so as not to antagonize the protesters. Chad disagrees, asserting his journalistic integrity, but relents when Anna threatens to cancel the interview. During the interview, Chad asks Anna uncontroversial questions, concerning such things as their home planet.

After the interview, Chad expresses dismay at having discarded his principles. ("Pilot")

To reclaim some of his integrity, take advantage of lagging poll numbers, and also to earn the respect of his patrons, Chad devises a plan to boost the popularity of the Visitors. He invites two guests, one a Pro-V advocate (Harold Stern), and the other, taking the Anti-V position (Marion Geiger), to debate their pursuit of diplomatic relations. Anna is displeased by the apparent slap in the face, but Chad visits her, prepared with poll numbers before and after the broadcast, showing the positive approval. Citing his ability to influence public opinion, Chad shows her that she needs his support. His plan works, since the United States offers diplomat relations with the Vs.("There Is No Normal Anymore")

In It's Only the Beginning, Chad does a report of the Visitor's Medical Centers and undergoes a scan just for

the report but finds out from Marcus that he has a impending aneurysm. Chad becomes unconvinced and aks for a second opinion, only to have Marcus reveal the entire medical history of Chad, just by his own body. Joshua later reveals that Anna gave Chad the aneurysm.

In Fruition, when the V's threaten to leave, he tells Marcus that he can use the media to put pressure on the government to make them do something, which Marcus said that his job was to report the news, not to editorialize, for if he did speak on the air it could cost him that job. His behaviour and actions are what Anna predicted, for his fear of loosing the V's will fuel his passion, that passion will generate a public outcry and will get what they want. Despite the fact he could loose his career, he does a report to make the public show the government how much Anna means to the humans. Although, the V's were never going to leave, the public believed that this report was a key element in public sentinment.

In Red Sky, he causes members of the Fifth Column on the New York Mothership to be captured. Joshua tells him that those he betrayed are trying to help the humans, and asks him to go to see what happens to the live-aboards. Stealing into the secret corridor, he watches the Live Aboard Humans undergo experiments and realizes that Anna had been using him. Near the end of the episode, Anna tells Chad that he has trusted the V's with his career and his health, without them, he would lose everything. At the Church when Jack tells his congragation that the V's are false prophets, Chad is seen standing up at the back and nodding to Jack Landry. He has finally seen Anna for who she is, and is ready to change sides.

Chad seeks forgiveness from Jack telling that he wants to join the Fifth Column, but Jack is uncertain because of Chad's recent betrayal of Joshua and the others. To prove his sincerity, Chad collects interviews with the live-aboards where they all describe their "dreams" of their experience in the DNA sampler (needle machine), and says that he saw the procedure on the Mothership and wants to expose this on television. Jack then tells him that the exposé will serve no purpose, since the humans do not stand a chance in an all out war with the Visitors. Chad is told that he should remain in his position close to Anna, where he can extract information for the Fifth Column, which he reluctantly agrees to doing.("Red Rain")

Later, Anna meets with Chad and asks him to interview Jack, ostensibly to give all sides of the debate a voice. Chad suspects a trick but Jack wants to take the risk and does the interview. Right after the interview, Father Jack performs a service during which an angry man starts an argument which leads to a brawl, with Father Jack stepping in and telling the disruptor to fight him instead. During the brawl, Chad realizes that the man who started the argument was actually a Visitor when he sees the man's reptilian eyes. The rucus was all a set-up, as Tyler video taped the incident on his phone in order to completely discredit Jack on television.

After Sarita Malik is killed, the Erica and the others show Chad what the Visitors really look like, much to his horror.("Laid Bare")

Anna brings Chad on her trip to the Vatican, where he meets Father Piers Moreau. He notices that Moreau is not convinced by Anna's charm, as Moreau notices Chad's uneasiness about Anna. As Father Piers Moreau is about to board the Visitor shuttle, Chad talks to him and offers to help. Moreau tells him that his fate is already sealed, and that Chad should trust his feelings (of uneasiness) about Anna.("Unholy Alliance")

Chad is informed by his producer that Prime Focus' ratings have been falling, and that a new newscaster will be brought aboard to serve as counterpoint to Chad's pro-Visitor stance. The producer is surprised that Chad is receptive to the idea, not knowing why Chad is really thinking.

Chad informs the Fifth Column about Anna's plans for the gala to announce Concordia, and they go about planning an assassination attempt.("Concordia")

Later, Chad steps up his work with the Fifth Column by compiling a list of the last group of live-aboards to be sent up to the motherships, so that they can infect them with the DNA virus.

In Mother's Day, Chad and another Fifth Column member record themselves wearing masks and holding Lisa as hostage. Disguising his voice, telling Anna to give up her life, for Lisa. Allthough it failed, Chad was no longer safe, as Visitor technology unscrambled the modulated voice and it turned out to be Chad Decker. His last appearence was when he was taken away by V guards. His fate is unknown.