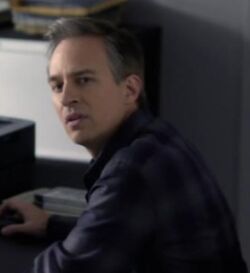 Initially, Erica was very worried about him being a Visitor, despite them being friends since attending Quantico academy together. Bolling accompanied Erica to talk to Father Jack Landry, who he started to believe was Fifth Column, however Erica appeared to have convinced him it was a waste of time. In truth, Bolling, revealing in a conversation with Assistant Director Paul Kendrick that he was brought in to watch Erica's behaviour, began to suspect Erica of being involved with Fifth Column after seeing, along with Kendrick, Erica talking to Jack in a surveillance recording. ("Unholy Alliance")

He, along with Erica, were assigned the task of guarding against an attack on the Concordia gala. When Jack and Fifth Column-disguised protesters rioted, Bolling was ordered to deal with them. This allowed Erica the opportunity to let Hobbes and Eli Cohn into the building, to get a clear shot at Anna. Following the shooting of Marcus, he becomes suspicious of Erica, and with Paul Kendrick's support, formally requested the Justice Department investigate Erica.("Concordia")

Shortly after, the FBI gets an anonymous tip telling them about the location of Fifth Column Leader Eli Cohn at a New York building. Since Erica is under suspicion, he and Paul Kendrick decide not to inform Erica about the tip-off.

When the FBI surround the building, it was Bolling who receives a call from Erica, and following Erica's appearance on a balcony, while being held hostage by the Fifth Column.

Bolling became angry that Erica was being held hostage and wanted her released, and even blames Jack when he spots Jack outside the building. Bolling was then very happy when Erica was released (along with Fifth Column disguised as civilians and the other hostages). However, his happiness is short-lived. When a fire-fight breaks out between the FBI and Eli Cohn's men, he restrains Erica when she tries to assist Joe Evans to get out of harms way. He then witnesses Joe Evans death in the crossfire and soberly watches on as Erica mourns to the death of Joe Evans. At this juncture, he agreed with Paul Kendrick that Erica was innocent and canceled their investigation into her, completely convinced Erica was not Fifth Column. ("Siege")

some time later he was present at the embassy where anna said how unhappy she was about Lisa and was at the shed where Lisa was and told his partner about the situation it is then revealed him and his boss planted a hidden camera in erica's house thus resulting in them hearing everything that was said about the truth of the visitors luckily near the end of the episode it is revealed Paul and Chris knew the truth about the visitors from the beginning as they are members of Project Ares they were in the bunker along with Lars Tremont,erica evens,Paul Kendrick and at least 50 other people were in the underground bunker thus resulting in them not being blissed ("Mother's Day")

Retrieved from "https://v.fandom.com/wiki/Chris_Bolling?oldid=14735"
Community content is available under CC-BY-SA unless otherwise noted.