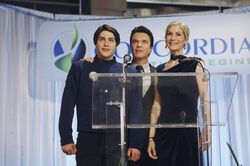 "Concordia" is the fifth episode of Season 2 of V. Anna uses her newest gift to mankind, Concordia, as a cover to hide an invading fleet of breeding vessels that will be used to ensure the perpetuation of Visitors for future generations. Meanwhile, Eli Cohn tries to convince Erica and the Fifth Column that the Concordia gala is the perfect time to assassinate Anna.

Anna is offering the world a massive urban renewal program called Concordia as her latest gift to humanity, and she’s unveiling it at a huge gala. The two Resistances team up (thanks to Ryan bridging the gap) and plan an assassination attempt.

Meanwhile, it’s Tyler’s birthday, and Erica and Anna are jockeying for his affection. Erica calls in his dad, since she feels like she’s losing, and together they give him a motorcycle and the same cross-country map route his dad took when he turned 18. Anna counters by offering the opportunity to be the first Visitor shuttle pilot as part of the Concordia program.

Chad Decker gets an anti-Visitor co-host, and that we are introduced to Thomas, Anna’s chief engineer responsible for the design of the Concordia structures, which will actually serve as landing pads for the Visitor breeding ships. They’ll be ready at the same time as the Red Sky has made earth’s women ready for breeding, and the Visitor soldiers will go “collect their women.”

The Resistance’s plan initially goes off without a hitch, with a Fr. Landry-led protest distracting security while Erica sneaks Hobbes and Eli into position. But Anna’s threat of de-Blissing Ryan’s daughter gets him to flip-flop, and he tips her off to the plot. Marcus speaks instead of her, and Hobbes shoots him in the chest, leaving him in critical condition.

Tyler, splattered with blood in the assassination attempt, decides to skip the pilot program and stay at home so he can catch up with his father. Anna says there are other options for Lisa. Fr. Jack is kicked out of the church for speaking out against the Visitors, and Ryan visits Anna and pledges his loyalty by calling her “my queen.”

Erica’s partner Chris is totally on to her, and he orders a special investigation into her involvement with the Fifth Column. Back at headquarters, Hobbes and Eli pin the plan’s failure on Ryan and put a target on his back.