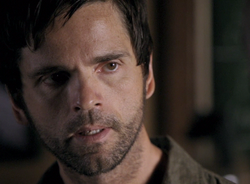 Cyrus was a Visitor and former Fifth Column member disguised as a coffee shop owner. He was fighting partners with Ryan Nichols.

Cyrus broke into Ryan and Valerie Stevens' appartment and left a business card with his name and an address behind an overturned framed photo. Val later discovered this and asked Ryan who Cyrus was. He just told her that Cyrus was some guy he used to know. ("There Is No Normal Anymore")

Ryan visited Cyrus to seek his assistance in recruiting their old crew to reform the resistance and get back into the fight. However, Cyrus opposed and pulled a gun on Ryan. He alerted the Visitors of Ryan's presence and said that the Visitors promised to "reconnect" him if he turned in just one more Fifth Column member. Ryan dismissed this craving (called bliss) as the ravings of a junkie, and he disarmed the double-traitor. Later, Marcus visited Cyrus's coffee shop and found just a pile of ash and John May graffiti. Cyrus took the suicide pill probably because of grief, in order to escape Ryan's wrath, or he was forced to do so. ("A Bright New Day")