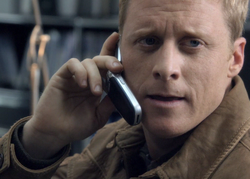 Dale Maddox was an FBI investigator and an undercover Visitor. He was a good friend and partner of Erica Evans and, like her, did not seem to trust the Visitors. After a fight between the Resistance and the Visitors, Dale was revealed to be a Visitor, and was wounded by Erica in self defense.

Dale continues to work up leads on the visitors and terrorist cells at the FBI with Erica. When Erica enters a resistance meeting under cover, Vs begin to attack, Dale enters and attacks Erica. Dale is attacked and supposedly killed by Erica, after storming the anti-Visitor resistance group. Erica's initial blow wounds Dale in the head, revealing his identity as a Visitor. ("Pilot")

Dale is brought back to the Mothership by the Visitors and treated for his wounds. He later regains consciousness. ("There Is No Normal Anymore")

After suffering from amnesia, Dale learns that Erica was the one who tried to kill him, and intends to kill her. However, the Visitor treating him reveals himself as a spy for the Fifth Column and kills Dale.

Erica was able to explain away Dale's disappearance to her superiors at the FBI, without revealing that she knows the true nature of the Visitors (indeed, Dale mentions when on the Mothership that he is not the only Visitor that has infiltrated the FBI), by mixing lies with truth.  Erica tracks down Dale's phone records and finds one number that has no match in any of his records.  The number itself is untraceable, as it was intentionally meant to be used as a cover.  However, Erica demonstrates the pattern that Dale would always call this number immediately before the FBI was about to stage an operation against the "terrorist cells" that were always giving them the slip (either Visitor sleeper cells, or human resistance cells which the Visitors wanted to take care  of on their own rather than get the authorities involved).  Erica says this is clear evidence that Dale was a traitor, aiding the "terrorist" sleeper cell, though she passes them off as a normal terrorist group and doesn't mention the Visitors involvement.  Erica's superiors at the FBI regretfully accept that the evidence shows Dale was collaborating with this group, and stop suspecting Erica.

Dale's death was notified to Anna, and she demanded Joshua to assemble the medical team immediately and

found out who had caused his murder. Anna later orders Joshua to bring the medical team to one of her chambers. In the meeting, Anna tells the team that if the guilty person does not admit to there crime, then she will choose one of the medical staff to set a example saying "The innocent will suffer." As Joshua was to step forward, David moved forward, and was sentenced to be skinned by Joshua.