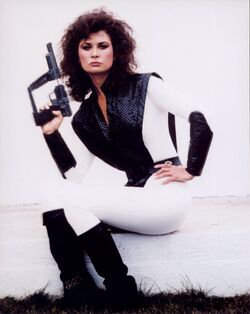 Diana was the second-in-command of the Visitor Earth fleet and an experienced scientist at the time of the First Invasion. She ascended through the ranks on Earth, having murdered her superiors. Following John's death, she became the new Supreme Commander and ordered the Second Invasion.

Diana was first seen aboard the New York mothership, when a team of reporters accompanied John on a tour. John introduced her as his chief science officer and second-in-command. Diana spoke about the scientific history gave out some information about the Visitors' motherships (that would turn out to be grossly inaccurate).

Later, she transferred to the Los Angeles mothership and assumed command. When the Richland Chemical Plant was retooled for the Visitors' use to produce chemicals, Diana and hundreds of technicians and workers came down from the mothership in transports.

Diana also recruited Kristine Walsh to become the Visitor spokeswoman/press secretary. Later, aboard the mothership, Diana and Steven consulted each other about the Leader's impatience with the conversion process and the scientific conspiracies the Visitors were orchestrating, not knowing they were being videotaped by Mike Donovan.

After the Visitors declared martial law, Diana became involved in the interrogation of prisoners aboard the mothership. She also authorized medical experiments upon Mike Donovan's cameraman, Tony Leonetti, and when Robin Maxwell was captured she used Brian to impregnate her. Diana led the attack on the Resistance's mountain camp. During the attack she was slightly wounded when Resistance fire damaged her skyfighter's electrical systems, causing damage to her human countenance.

A year after the failed mountain camp attack, Diana is involved in the interrogation of Kristine Walsh after she is found intruding in a secured area of the mothership. Diana accepts Kristine's explanation that she was lost, but also tells her that she has enemies who would use anyone and anything against her, and that she could not allow that.

Diana's squadron commander, Pamela, arrives to oversee a new project and demotes Diana back to her original scientific role, stripping her of all military authority. Diana later murders Pamela.

Diana is a pioneer in the conversion of humans to aid the Visitors, has inoculated the Visitors against all known Earth diseases, and has developed a foolproof truth drug. She is determined, and Steven and Pamela see her as "on edge" when feeling threatened. Her vengefulness is displayed when she rejects John's pragmatic approach towards impending defeat. This led Diana to finally kill John with the intent to take over as supreme commander of the fleet.

Mike Donovan was able to capture Diana shortly after the resistance released the Red Dust. A year after the invasion ended Diana was scheduled to be tried for crimes against humanity. Nathan Bates hired Ham Tyler to fake her assassination and abduct her. Bates planed to have Diana use her scientific knowledge to create innovations that he could incorporate into his products at Science Frontiers. Martin found Diana and tried to kill her but she was able to overcome her attacker and fatally wounded him.

Diana was able to signal for help and return the visitor fleet where she finally assumed the role of supreme commander. She quickly developed a rivalry with the fleet’s battle commander Lydia. She ordered a second invasion of the earth but the progress of the attack was quickly halted when she discovered that the red dust was still effective on the colder half of the planet. Diana made a hesitant alliance with Nathan Bates to make Los Angeles an Open City. She continued overseeing the invasion but was only able to achieve limited success due to the red dust and the resistance fighting back. Diana was obsessed with recapturing Elizabeth, or creating a new hybrid through cloning or other methods. She also led a campaign to uncover Fifth Column members and worshipers of zon.

After a string of failures, The Leader sent Charles to take over command of the fleet and she was demoted yet again. Diana was forced to briefly married Charles before a botched assassination attempt by Lydia resulted in his death, for which Diana and Lydia framed Marta. Her distrust of Lydia Led her several times where she would either try to kill Lydia or one of Lydia's close family members. She discovers that Inspector General Philip is a member of the Fifth Column and tries to expose his treason. When last seen, Diana had been placed under arrest by Philip, who did not know that Diana secretly planted a bomb on board the Leader's shuttle.

In the 2008 sequel novel to the original miniseries, V: The Second Generation, Diana has finally risen to the post of Supreme Commander and was known as Commandant Diana.

Behind the Scenes Edit

Retrieved from "https://v.fandom.com/wiki/Diana_(1983-85)?oldid=14826"
Community content is available under CC-BY-SA unless otherwise noted.