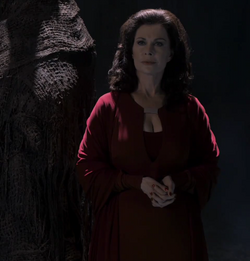 When Diana was the Visitor High Commander, she was training Anna to become the next queen. Diana had actually worn human skin, and over time she herself started experiencing human emotion. Anna, believing that human emotion was a threat, did what she had to do to protect her species and so took over before it was her time to be the High Commander. Before being deposed, Diana designed special escape pods that were undetectable by human or Visitor technology, but was not given the chance to use them. She may have also have lain the clutch of eggs that included Ryan Nichols, as she refers to him as her child.("Uneasy Lies the Head")

When Anna had to shutdown the life support on her six soldier children who were deeply affected by the Fifth Column bombing, she decided to reach her mother Diana by accessing a secret section of the mothership that resembles the V homeworld. ("Red Rain")

Because Diana had lived in human skin twice as long as Anna had - probably longer than most other V's - she sought out her mother for insights into human emotion and how to defeat it. Diana warned Anna that the Visitors' plans to breed with humanity would be disastrous, as the hybrids would be just as emotional as humans were and would not be loyal to their queen. After Anna attempted to immolate her mother, Diana agreed to help her in exchange for a necklace, which played Diana's favorite piece of Human music. Diana said this music made her feel sadness and sorrow yet described it as beautiful. She also told Anna about the soul and how it cannot be measured or dissected. Anna's response to these revelations was to use Ryan's daughter to manipulate him and order Joshua to try and dissect the human soul. ("Serpent's Tooth")

When Lisa's body began maturing to become fertile, Anna commented on how she went through it with her mother's help and that "before she died," Anna promised that she would mold Lisa into a perfect leader.

Almost every time Anna visited, Diana warned Anna to watch her back; she insisted (with no knowledge of her granddaughter's clandestine activities) that Lisa would betray her just like Anna did to her mother. But Anna rejects the idea, for she will do something for Lisa that Diana never did for her daughter: teach her to rule. ("Laid Bare")

While at the Vatican the next day, Anna discovered that one of her mother's agents had been secretly embedded there for years, gathering information on the human soul. Since the sleeper would not reveal the results of his research to Anna, the High Commander brought him to "his" queen. The priest told Anna and Diana that the human soul was immortal and that it was a great gift to the Visitors to be embraced, not feared. Diana, having come to this conclusion herself, killed the priest rather than allow Anna to torture him. Anna, in typical fashion, brushed this off and told her mother that she had just removed her only ally. ("Unholy Alliance")

Lisa discovers Diana's prison one day while watching Anna emerge from one of her visits. She is shocked that Diana is very much alive, and starts to bond with her. Diana counsels her that Anna must never suspect anything about Lisa, and that she has to appear to be every bit obedient and loyal to Anna.

When Lisa is unable to follow through on her courtship ritual with Raphael, she goes to Diana for comfort and advice. Diana hugs Lisa, who is confused about Diana's actions, but Diana just implies that it is something that a mother should do, but Anna never did.("Birth Pangs")

When Ryan approaches Lisa for help, she brings him to see Diana, who helps him to escape in a secret escape pod. Diana is pleased to see one of her own children, and is stunned to learn about Ryan's hybrid daughter. She promises to use her own bliss to cure Ryan's daughter, on the condition that Ryan escape and resist Anna on the ground. Diana then says that any enemy of Anna is a friend of hers. After Ryan escapes successfully, Diana asks Lisa to contact her most trusted aide: Marcus.("Uneasy Lies the Head")

As he recovers, Marcus visits Diana and demands an explanation. She tells him that when she decided to abandon her plans to conquer Earth, Anna disagreed and deposed her mother in a display of her first human emotion- pride. Marcus stormed out on her, troubled by Diana's revelations. Later on, Lisa realized that many of Anna's plans were originally Diana's plans, and went to her grandmother in the hopes of getting more information about the eventual invasion. Diana remained tight-lipped until Lisa mentioned the Fifth Column's plan to blow up the New York Concordia site's blue energy reactor. She explained that blue energy has two forms- inert and weaponized. If the Fifth Column accidentally weaponized the blue energy, the explosion would destroy anything within a hundred miles from the site. Although they stopped the explosion, Lisa revealed even more bad news: Anna was experimenting with blissing humans, and had successfully blissed Tyler. Realizing that she was running out of time, Diana asked Lisa to reveal her presence to Erica Evans. ("Devil in a Blue Dress")

Diana and Erica hatch a plan which hinges on Anna leaving the safety of her ship. The Fifth Column will pretend to kidnap Lisa, and Anna will go to rescue her. When they are alone, Lisa will shoot Anna and end her reign. While this is happening, Joshua and Ryan will break Diana out of her dungeon so that she can retake power immediately. Unfortunately, Anna deceived Lisa into sparing her. Undaunted, Diana refused to run and instead gives the residents of the New York mothership a passionate speech on how the Visitors must embrace emotions, the soul, and humanity. Though it initially looks as though she was successful in swaying them, Diana is literally stabbed in the back by Anna's tail causing Diana to stop speaking. Anna then launches Diana off her tail and sends her flying across the room. With her dying breath, Diana warned her daughter that she had doomed them all.("Mother's Day")

Behind the Scenes Edit

Retrieved from "https://v.fandom.com/wiki/Diana_(2009_series)?oldid=13478"
Community content is available under CC-BY-SA unless otherwise noted.