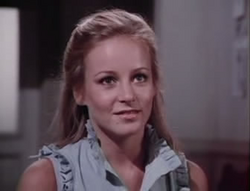 Elizabeth Maxwell was a resistance agent, the only daughter of Robin Maxwell and Brian, and the twin sister to her Half-Human/Half-Visitor hybrid brother.

Elizabeth "Starchild" Maxwell was the Half-Human/Half-Visitor hybrid daughter of Visitor Brian and Robin Maxwell and the grandchild of Robert and Kathleen Maxwell and the niece of Katie and Polly. She is the only known successful offspring between a human and a Visitor and was a "product" of one of Diana's experiments into crossbreeding.

When she was born, it was discovered she had a younger twin reptilian brother, who died from exposure to an infection (which was later used as a basis for the Red Dust virus, that could kill the Visitors). Elizabeth however thrived and began aging at a rapid rate to the point she was an 8-year-old mere hours after birth. When Elizabeth's father, Brian, was killed by her mother, Robin, Father Andrew Doyle grew afraid for her safety and took her to the Visitors for her own protection. Diana realised the importance of the child and kept her close by. She was brought back to her family following the Red Dust poisoning the Earth against Visitor habitation, and demonstrated remarkable abilities, such as disabling the self-destruct device intended to destroy the Earth.

One year after Liberation Day, Elizabeth was seen living with her mother and grandfather at their mountain ranch. The world media was centered around learning about her and were curious of her involvement in saving the Earth. The journalists tried to talk to her, but Elizabeth used her new telekinetic abilities to keep them away.

Some days later the girl would go through another metamorphosis, that turned her into a full-grown woman of 18 years within a matter of hours. Soon after that the Visitors decided to attack the ranch, and Elizabeth, together with Julie and Robert had to escape in order to rejoin the Resistance.

At first it was difficult for Elizabeth to get used to her new status and physical condition, but with the aid of her friends, she came through her fears and became an ever-helpful member of the Resistance. She used her expanding powers to help them in their struggle against the Visitors. During this period of her life she also developed a strong romantic relationship with Kyle Bates, who also joined the Resistance.

In the (unfilmed) series finale, Elizabeth was revealed to be destined to find an artifact on Earth called the "Anyx", which was the source of all great power and once belonged to the Visitor's gods who hid it away on Earth in the face of someone on their world taking control of it and destroying them. Elizabeth was meant to find it and use it to rule the people of the Earth and eventually conquer the Visitors. Elizabeth stole an artifact called the "Syllabus" which was a scroll that lead to the Anyx' location from the Leader and escaped with the Resistance back to Earth. She and the Resistance were looking for the artifact amidst the destruction the Visitors have wrought in the time of peace, which they took advantage of to crush the majority of the Resistance.

Elizabeth's powers included eidetic memory, enhanced hearing, genetic memory, healing, levitation, precognition, remote viewing, technopathy, telekinesis, telepathy and voice duplication. But when she found the Anyx, her powers would expand significantly and become more varied to the point that she would dominate both races. Elizabeth was also immune to the Red Dust, despite her Visitor genes.

As a result, the Visitors (primarily Diana) made repeated attempts to capture her as her DNA could hold the key to develop a permanent cure or anti-toxin to the Red Dust and allow the Visitors to conquer the remaining protected areas of the Earth. Elizabeth's DNA could also be used to create a new version of the Red Dust that was harmless to life on Earth.

In "V" The Final Battle she was trying to make peace with Diana, but Diana said "It's not in our destiny". Elizabeth asked for peace again in Visitors language, but Diana yelled "No!"

Retrieved from "https://v.fandom.com/wiki/Elizabeth_Maxwell?oldid=14747"
Community content is available under CC-BY-SA unless otherwise noted.