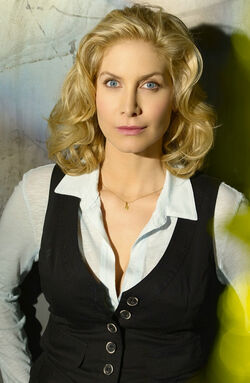 Erica Evans is a top agent with the FBI's Counter Terrorism Division. She can be considered the main protagonist of the series. She is a single mother doing the best she can raising Tyler, her troubled teenaged son. After the Visitors arrive, Erica gets caught up in the greatest conspiracy and toughest fight of her life, to save humanity and to keep her son safe.

Erica wakes up in bed when she feels the ground shaking. She goes into Tyler's room (her son) to ask him if he feels it too but he isn't there. She calls him and tells him that he is in big trouble. She asks where he is and tells him she's coming for him when the ground starts to shake more rapidly. The phone cuts out and she looks out the window and sees a giant mothership hovering over New York City. She goes out looking for him but the army won't let her through to where Tyler is. When they are distracted she goes through and finds Tyler. The two then watch as Anna, the visitor high commander, broadcasts her message to the world from the mothership.

The next day, Erica calls her partner Dale Maddox and tells him that when the visitors came most terrorist activity dropped apart from one which actually spiked. She tells him that they're arming themselves with C-4 while the Earth is distracted by the Vs. Dale asks if her ex has rang and she says that he rang to say he is fine but never asked how they are.

Three weeks later, Erica enters her office and tells Dale that that a truck suspected of having drugs was checked last night by the NYPD and they didn't find drugs but did find, however, traces of C-4. She then shows him a photo of where the truck came from on Long Island. The two travel to Long Island and Erica notices that in the photos that the white truck is parked beside a shack. They then enter the shack and go down a hidden stairway underground. They find a dead body, a crate of C-4 and fake docs and passports.

Erica discovers the identity of the terrorist and gets a search warrant to his house. They enter but it is empty so Erica calls his cell phone. She finds it with a text on it telling him to go to a meeting that night. Erica goes to the meeting and discovers that the Vs have been on Earth for years and have positioned themselves in business, government and religion. Erica sees photos of the terrorist she has been tracking and discovers that he is a visitor. People then enter the meeting and start attacking, one of whom is Erica's partner Dale. Erica hits him over the head and pulls back a piece of his skin revealing reptilian scales. Erica escapes with Jack Landry. She tells Jack that she can't trust anyone anymore and the two discuss how they will fight the visitors and help build a resistance though, not known to Erica, her son has joined them as a Peace Ambassador. ("Pilot")

As Erica and Jack discuss the events, a Visitor shuttle flows overhead, and lands at the scene. The two watch as the crew begins loading bodies onto the shuttle. Jack begins to use his cell phone call for help, but Erica cuts him off, not wanting her identity revealed. She locates a nearby payphone, and reports the incident to the 911 operator.

The 911 call is intercepted by a mothership, who immediately sends a seeker to track and kill Erica and Jack. They notice the device and flee, hiding behind a corner and ambushing the device with a piece of pipe just as it was about to fire its projectiles.

The next day, Paul Kendrick tells Erica that Dale is missing, and asks her to come into the office, where she's interrogated by a panel. When his car is found at a warehouse, Erica visibly recognizes the address upon arrival, prompting Paul to inquire about that knowledge. She reveals that the address came up in investigation, making him suspicious at her for withholding that information. While at the scene, she quickly retrieves her badge and gun, which she had left behind when infiltrating the resistance meeting. She also retrieves Dale's cell phone. Although he wants answers, Erica insists on locating him.

Paul later confronts Erica with a recording of her 911 call. Erica expressed her suspicion that there was a mole on the team, which required her to use another way of requesting assistance. Paul reveals that 911 never recorded the call, and that the phones were rerouted by the suspected terrorists, and were tapped by the authorities. Since the phones were tampered with, Paul gives her story the benefit of doubt. Erica reveals that she suspects Dale is a traitor.

Erica later meets with Dale's wife, suspicious of her claim that Dale had called her the night before, which is not shown on his cell phone. Dale's wife reveals that he had an alternate cell phone, and provides the phone records, which she had stumbled across some time before. The phone records had another, frequently-called phone number.

Erica identifies Dale as the terrorist mole, based on the fact that the unidentified calls corresponded identically to when the terrorists were being tipped off.

Erica steals a list of everyone who has contacted the Visitor Threat Assessment Joint Task Force.

Erica shreds a photo of Dale in disgust. ("There Is No Normal Anymore")

Erica tries to locate a scientist, Dr. Watts, who seems to be on to something about the Visitors and Red Rain. Having disposed of the tracker sent by the Visitors, Dr. Watts' assistant discloses that he is actually the one they are after. Dr. Sidney Miller found the remains of a Visitor that dates back 50 years (he named Alpha, which he has stored away, and has realized that Red Rain contains high levels of Phosphorus.

Erica's partner, Sarita Malik grows increasingly suspicious of Erica; as Erica grows suspicious of her partner. This leads to a confrontation, where Erica discovers that Sarita Malik is another sleeper Visitor agent. Erica, Hobbes and Jack interrogate her and manage to find out about Visitor human abductions, before she is killed by lethal injection.

Meanwhile, Erica is concerned that Tyler is growing increasingly distant from her, and contacts her ex-husband, Joe Evans to try to draw Tyler from the Visitors.

Erica contacts Eli Cohn as they plan an assassination attempt on Anna. In a highly-secure gathering, Erica lets Eli Cohn and Hobbes into the venue, so that they can shoot Anna. Ryan rats on the Fifth Column and Marcus makes the speech instead of Anna. To Erica's surprise, Marcus calls Tyler on stage with him, placing him in harms way. She rushes up to distract Tyler, while Marcus gets shot. Erica comes under increasing FBI suspicion, since both of her former partners have disappeared, with Sarita Malik later found dead. Her colleagues decide to keep her out of the loop, when the Visitors tip them off on the location of Eli Cohn's base. Eli Cohn dubs Erica Evans the new leader of the Fifth Column. It is also revealed that the V's experimented on Erica when she was carrying Tyler, causing his DNA to have missing sequences. The same experiments were also done to Eli Cohn's wife. After Eli Cohn's death, Erica Evans takes over leadership of the Fifth Column. Following Joe Evans' death, Erica proclaims that she will rain hell on the Visitors.

Erica learns from John Fierro about the location of Dr. Veena Rai and goes to confront her with Hobbes. She then discovers that Dr. Veena Rai is a Visitor agent, but Dr. Rai commits suicide before they are able to get any information from her. They discover her safe, where they realize that there are 29 subjects who survived their DNA experiments to adulthood, each in one of the 29 Visitor cities (including Tyler Evans). Erica thus realizes that Tyler is expendable.

Erica later plants a virus into one of the liveaboards. It does kill a couple of liveaboards, but to Jack Landreys horror, Erica doesn't care. During the attempt to get the virus, Hobbes gets wounded in the shoulder. Eventually, Erica's plan does succeed into forcing Anna to admit the 5th Column are still around. Hobbes later visits Erica, who admits he likes her. He reveales that he had a wife, and that the V's killed her. Now both Erica, and Hobbes have the same reasons to fight the V's. Eventually the two make love, starting a new relationship.

Erica is a strong-willed, independent woman who has struggled to keep a double life as a FBI agent and as a mother. The arrival of the Visitors furthers her already numerous problems, as she tries to prove the Visitors as invaders. Her relationship with Tyler deteriorates when he becomes a Peace Ambassador for the Vs. Also, it suffers another blow when Tyler discovers his mysterious past. However, when Lisa breaks up with him, Tyler seeks comfort in his mother, and the two begin to reconnect. The two are shown to be very close after overcoming their issues. However, the tables turned once more when Anna admits to Tyler that she considers him as a son, while Lisa goes to Erica, instead of Anna, for comforting.

Erica also becomes close with Jack Landry, who she helps to solve his doubts whether to trust the Vs or not. The two decide to from a Resistance when they are shown the Visitor's true nature. Both Erica and Jack are determined to show about humanity's positive traits, as they both agree that they cannot be like the Vs and sacrifice innocent people in the war.

However with the death of her ex husband at the hands of a Vistor attack on the Fifth Colum and Tyler's abandoment of her to join the Vistors Erica becomes a harder and colder to person. To Jack's horror she is now willing to sacrifice innocent lives to get at Anna and the Visitors. When a plan to damage the DNA colloection is discovered and the unowing carries of the DNA bomb are discovered and killed, Erica state her only regret is the plan didnt work.