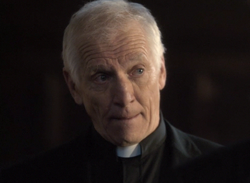 Father Travis is a Catholic priest at St. Josephine's Church. He acts as Father Jack Landry's mentor. Father Travis is immediately amazed and devoted to the Visitors upon their arrival to Earth; believing them to be God's creatures and thus part of God's divine plan. His amazement soon and obviously becomes a blind devotion that makes him ignorant of the V's clearly unscrupulous motives.

Father Travis welcomes the Visitors with open arms when they arrive. He tells Jack that they are God's creatures and are the world's saviours. He scolds Jack when he says in his serman that the Vs should earn our trust. He is then amazed when Roy gets up out of his wheelchair and says he was healed by the Visitors. ("Pilot")

Father Travis continually counsels Jack against speaking against the Visitors from the pulpit. He gets pushed over while trying to stop Tyler and his friends from vandalizing St. Josephine's Church, but does not call the police because he does not want the church to have any more attention. He blames Jack for the vandals actions.("Unholy Alliance")

Father Travis is a man with only faith in God to keep him through the tribulations of life. The arrival of the Visitors was a clear revelation of faith for him and an affirmation of his beliefs; something which was further strengthened by the dictation of the Vatican of the Vs as God's creatures, all of which culminated in him becoming another blind follower of the Visitors and a defender of their cause despite any obvious involvement and implications of the V's unscrupulous activities. He sees them as sacrosanct and any action against them is an action against the Church.

Considering that the Visitors were revealed in the pilot episode to have covertly infiltrated many areas of human society(including religions)long before their open arrival, Father Travis' welcoming and conciliatory attitude towards the Visitors may be an indicator that he himself is, in fact, a Visitor 'plant'. However, to be fair, it is also entirely possible that he is quite human, and is simply doing what he perceives to be 'God's will' by welcoming the Visitors. Or simply following the directives of the Vatican.

("There Is No Normal Anymore")

("It's Only the Beginning")