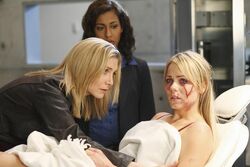 Erica seeks out a scientist (Lawrence Parker) who may have created a weapon that allegedly worries the Visitors (because it can kill reptiles), Anna announces that the Vs may be departing, and gives Chad a list of Fifth Column members to investigate.

After Anna ordered her daughter's legs broken, an injured Lisa is placed in the middle of an alley. A V has also been cut into her face. Erica promises Lisa that they'll find whomever did this, and Lisa gives a very precise description of the culprits, and one of the men is apparently Hobbes. The other is a man named Lawrence Parker, a scientist who has recently gone missing. Erica finds out that Lisa is a V and also is Anna's daughter. Anna explains that she didn't want her daughter to become a target so her true identity was hidden.

Hobbes was hired to assassinate Parker, not work with him to attack a V, so Erica decides to concentrate the investigation on locating Parker. She also allows Tyler to see Lisa, which scores points for her on the mom front. Lisa's legs are healed by Joshua, and then Joshua also tells Erica of his true allegiance to the Fifth Column. Anna wants something that Parker has, but Erica needs to find Parker first to find out that that something is.

Anna announces the attack on Lisa in a world-wide press conference, and she claims that the Vs no longer feel safe on Earth. They are considering leaving the planet forever. Chad is frustrated because Anna did this latest media announcement without any input from him. Doesn't she trust him? Chad decides to keep supporting the Vs, and tells his viewers to do so as well. Anna asks about Chad's anonymous inside source for Fifth Column info, but will he be willing to expose Jack?

Hobbes finds Parker's apartment and takes the hard drive for the scientist's computer, and he informs Erica where Parker is, but doesn't mention anything about the computer data. Parker explains that he was working on a project which was supposed to help slow the effects of global warming. One side effect of the compound they created was a virus which turned out to be deadly to marine life and to reptiles.

The FBI is given Parker's location, but before agents break into his apartment, Parker gives Erica the names of the rest of the scientists who worked on the project. Erica manages to get a sample of the compound before the feds come in, and she has to arrest Parker as well. The Vs are given permission to interrogate Parker first, since the Earth governments wish to convince the Vistors to stay. However, the V invasion plans are still in the works, and Anna will turn off all of the planet's radar systems so that they won't be detected.

Erica tries to convince Lisa to not lie and say that Parker was her attacker, but Lisa won't openly defy Anna and identifies Parker anyway. Meanwhile, Hobbes meets with Marcus, handing over the hard drive in exchange for money and for his name to be cleared as one of Lisa's attackers.

Ryan, meanwhile, is still on the run, but now he's unsure he wants to still have human emotions, even when he'd embraced them before. Having emotions after losing Valerie's trust is truly heart-rending for him. However, he's so distraught that he ignores a text from Dr. Pearlman on his phone: Valerie's water has just broke.