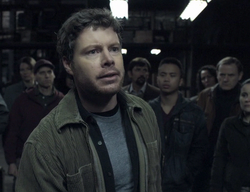 George "Georgie" Sutton was the leader of the resistance team against the Visitors. He had a dark, mysterious past with Ryan and attempts to drag him back to their old lives.

Georgie constantly calls Ryan Nichols and tells him that he needs his help. Ryan tells him that he's not that guy any more and cancels all of his calls. Georgie, however, further pursues Ryan and waits outside his work for him. He tells Ryan that he has built a team of about twenty-five people and needs his help. Ryan declines his offer again but Georgie gives him a piece of paper with the address of where his group are meeting in case Ryan changes his mind or grows a conscience.

Georgie leads the resistance meeting that night and informs everyone that the Visitors have been on Earth for years and have disguised themselves by cloning human flesh over their reptilian skin. The Visitors then attack the meeting and Ryan shows up and helps Georgie escape. ("Pilot")

Georgie is tracked down by Jack Landry, who shows up at a residence tied to him. Georgie later finds Jack at his church, pulling a gun on him, but is assured that Jack is not a threat. Later, Georgie unites Jack and Erica Evans with Ryan. he then said ryan was not a threat ("A Bright New Day")

He is then capture

d and tortured to tell the names of his fellow Fifth Column members and he soon does give names but of his dead family that the V's murdered. Later on, Anna then shows Georgie the memories of the V who killed his family, believing that "love is the greatest flaw of humans and the best tool to break them". He watches his family being slaughtered, but this does not make Georgie reveal the names. Ryan soon gets to speak to him threw a communication device that Joshua has and Georgie tells them to leave him and then speaks with Jack Landry to give way of his sins. He then tells Joshua to kill him stating, "I want to be with my family" and Joshua injects him with a sedative that lets him pass away peacefully. ("John May")