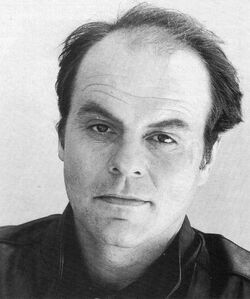 Ham Tyler (or better known in the Resistance as "The Fixer") was a CIA operative who, along with associate; Chris Farber, went on specially requested missions for the U.S. government into other countries. While on a mission in Vietnam during the Vietnam War, Ham married a Eurasian woman and had a daughter with her. His superiors promised that his family would be evacuated during the mission. But while he and Farber were sent to their target, a bombing raid caused his family's disappearance (and most likely deaths) and he never saw them again. Ham was devastated by the loss of his family and he and Farber left the agency, becoming mercenaries-for-hire.

During the First Invasion, he and Farber, join the Resistance and helped get the fledgling Los Angeles Resistance group better organized and use proper tactics and use better weaponry (such as Teflon-coated bullets designed to cut through both the body armor and reptilian skin of their enemy). He also informs them that their current hideout is poorly chosen since doesn't have an emergency escape entrance. When Tyler finds them, he tells the group that the Resistance is much larger than they know and has form cells worldwide. He also tells them that the Visitors know where they are and are currently on their way to capture or kill them. Donovan's group barely makes it out of their hideout alive while Tyler and Farber prove their credentials as they cover the new recruits' escape with deadly efficiency against the Visitors.

Here he forms a rivalry with Resistance leader Mike Donovan that eventually comes to a head when they disagree about when to distribute the newly-made Red Dust toxin to other Resistance groups; his fighting style, strength and loyalty earned Ham's respect and gave him the nick-name "Gooder". (Actually, Tyler and Donovan knew each other before the Visitors arrived on Earth. They were antagonists with very different morals and political philosophies. It was at this time that Tyler started calling Donovan "Gooder," because of Donovan's idealism. He calls Donovan Gooder in their very first scene together in V: The Final Battle.) Ham coordinated the world-wide dispersal of the Red Dust in conjunction with Mike's attack on the Mothership, leaving the Earth poisonous to Visitor habitation. Tyler leads the attack on the Visitors' embassy on the ground, using mortar rounds loaded with Red Dust. In the foyer of the building, Tyler takes down Steven who was in a firefight with Farber and then kills him by dumping a small bag of Red Dust directly on his face.

One year after Liberation Day, Ham has started a high-tech security agency and is hired by Nathan Bates for $500,000 to capture Diana and assist in interrogating her for Visitor technological information. This is a decision he comes to regret as this leads to Martin's death and Diana causing the Second Invasion of the Earth. Ham was disgusted by how Bates treated human life and deserters, rejoining the reformed Resistance. He continued his friendship with Donovan and became Kyle Bates' (Nathan's son) mentor, giving him the nickname "Ace". During an unauthorized raid on a Visitor convoy, Ham was captured. Using him as a test subject for Charles' improved conversion chamber, Ham endured visions of his wife and child with Donovan against him. Converted, they implanted a "trigger phrase" that would cause him to kill Donovan. During a prisoner transfer, the trigger was used by Bates. However, Elizabeth caused a floodlight to crash into Tyler, causing him to miss Donovan and hit Nathan Bates.

He fought for the Resistance time and again and departed with Farber to escort Robin Maxwell to Chicago. In the (unaired) series finale, Ham and Farber return to help Mike's Resistance group escape Visitor attack shuttles. Ham now currently works with the Resistance to find the "Anyx", an artifact that can defeat the Visitors, amidst the destruction the Visitors wrought during the Armistice, when the Visitors took advantage of the peace to wipe out the majority of In Liberation Day. When Ham is at Science Frontiers, Nathan looks to a Television Feed a sees a "File Footage" Photograph of the Alien Commander Diana, Nathan then asks Ham what would he do with Diana, which causes Ham to also look at the picture of Diana, he says to Tyler that he would use Diana for target practice and when Nathan was thinking about capturing her so that Diana could assist with this universal cure for cancer, Ham says that Diana is a disease.

In the novelization of the V and V: The Final Battle miniseries by A.C. Crispin, Tyler is mentioned briefly in the opening scene: as Donovan tries to escape the attack on the Central American village he's covering as a cameraman, he spots Tyler in a helicopter, sitting next to the pilot. Just as the chopper seems about to open fire on Donovan, it zips off at the sight of the Visitor mothership's approach.

Retrieved from "https://v.fandom.com/wiki/Ham_Tyler?oldid=14843"
Community content is available under CC-BY-SA unless otherwise noted.