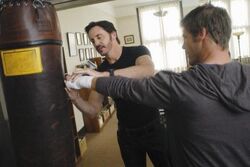 Erica, Ryan, Father Jack and Kyle Hobbes learn Anna's sent a V shuttle filled with a deadly V tracker team to find them, and must figure out how to stop the shuttle from landing. Meanwhile, Anna gives Tyler his invitation to the Live Aboard Program, and Chad confronts Father Jack on what he knows about The Fifth Column.