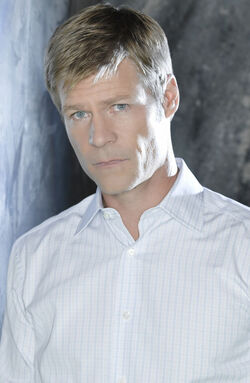 Father Jack Landry is a passionate priest whose faith in God and religion is shaken by what appears to be the Visitors' salvation of humankind. He is surprised to find himself battling not just for the souls of people, but for their very lives. Jack is a former Chaplain in the U.S. Army. In that capacity, he served two tours in Iraq.

Jack immediately does not trust the Visitors and attends the resistance meeting after being handed evidence of the Visitors' malice by a mortally wounded man. The man had attended one of Jack's previous sermons, during which he warned his congregation not to be overly taken by the Visitors. The man liked his sermon, and believed he could trust Jack to take his evidence to the meeting.

At the meeting, Jack meets Erica, after they are attacked by the Vs. The evidence Jack was carrying, which was ultimately shared with the attendees, was photographs of the Visitors' true identities. Jack and Erica flee for safety together and discuss their plans to build a Resistance against the Vs. ("Pilot")

While discussing their plans, Jack and Erica see a Visitor shuttle pass overhead, and land at the scene of the attack. The occupants begin to retrieve bodies, and Jack, worried that they're going to get away with the crime, attempts to call the authorities. Erica cuts him off, worried that the call would be traced back to them. When Erica makes a call from a payphone, the call is intercepted by the Visitors, who send a seeker to track and dispatch them. They get away, however, by ducking behind a corner and ambushing the seeker, smashing it with a pipe.

Back at the church, Jack finds out the police had visited, asking questions about the wounded man. When they revisit, Jack is actually visited by an FBI agent, Sarita Malik. Jack is a bit evasive, at first not revealing that the man had talked about the visitors. Later, Jack visits the agent and provides her with the photos that the man had given him. There, he sees Erica, and finds out she's an FBI agent. ("There Is No Normal Anymore")

A man goes for confession at Jack's church. Jack tells him that it is time to fight. The man turns out to be a suicide-bomber who blows himself up in front of the Visitor Peace Center. Jack is shaken after the incident. Erica, Ryan, Hobbes and Jack decide to get in touch with the Fifth Column led by Eli Cohn. Jack continues to doubt and feel guilty over the situation. Meanwhile Ryan asks Jack if he has a soul. Chad informs Jack that Sarita Malik is likely to be a Visitor agent. ("Serpent's Tooth")

Hobbes and Jack go to Erica's rescue and capture Sarita Malik, holding her captive in their underground headquarters.Jack entertains an interview on the media, even though Chad warns him that he is likely to be cornered into appearing in a bad light. As the interview concludes, a Visitor agent masquerading as a member of the public starts a fight with Jack. The scuffle is filmed by Tyler and it finds its way on to television. ("Laid Bare")

Jack receives a delivery from the Fifth Column in his church, consisting of a head of a Visitor. He gets in touch with the Fifth Column. Eventually, Erica, Hobbes, Ryan and Jack meet up with Eli Cohn and start to form an alliance.

Jack returns to the church to find the aftermath of Tyler's attack. Father Travis confronts Jack about his anti-Visitor rhetoric. Meanwhile, Jack finds a mobile phone that identifies the vandal as Tyler Evans. Jack tells Erica about the incident and Tyler's involvement. ("Unholy Alliance")

The Fifth Column plan to assassinate Anna during her announcement of Concordia. Jack leads a protest outside the venue to distract the FBI, so that Erica can give Eli Cohn and Hobbes access to the venue to shoot Anna. The attempt is foiled by Ryan, who rats out, leading to [[Marcus being shot instead of Anna. ("Concordia")

Jack eventually gets defrocked for his refusal to give up preaching against the Visitors. He is evicted from his vicarage, and ends up staying in the secret underground bunker with Hobbes, although he says it is a temporary measure. ("Siege")

Ryan tries to talk to Jack, but Jack no longer feels he can be trusted. Ryan says that he expected Jack to be the most likely one to give him a second chance. ("Birth Pangs")

As Erica and the Fifth Column plan their attack on the Visitor live-aboards, Jack becomes worried about the new hard line that Erica is taking. In trying to gain access to the DNA virus, Jack is concerned that humans may be harmed in the process. He is shocked when Erica shoots two bullets into the chest of a security guard, even though he later finds that the guard was wearing a bullet-proof vest.

He gets even more withdrawn after realizing that the DNA virus is untested and may have unknown side-effects on those the Fifth Column infect. Erica tries to reach out to him to explain the need for the hard line, but he refuses to accept her explanations. ("Uneasy Lies the Head")

[FATHER JACK LOWERY] 30 years old, a Catholic priest, Father Jack is the assistant pastor at St. Josephine's Church in Los Angeles, a parish that has seen its ranks of followers dwindle to almost nothing. On the verge of being reassigned, Father Jack sees a renaissance of faith when the Visitors arrive, as fallen-away Catholics return to church in droves, initially fearful of this brave new world. Unimpressed by the surge of hope and devotion that follows the arrival of the Visitors, Father Jack fears that his parishioners are relating to the aliens as god-substitutes...

Parallels to Original Series In the original V series there was also a priest fighting with the resistance. He worked towards bringing faith to the visitors, unsuccessfully.

In S01E04, Fr. Jack Landry's medals, from his days in the military, are shown. He apparently has a Purple Heart, Bronze Star and a Southwest Asia Service Medial. There may be more in the box; the haphazard way in which they are stored suggests that he does not regard them highly.