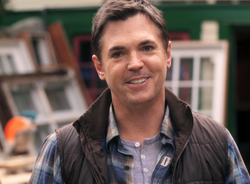 He was estranged from Erica due to suspicions of her infidelity, which stems from medical tests conducted during Tyler's near-fatal motorcycle accident where he was identified as not being Tyler's biological father. In reality, it was due to the genetic manipulation by the Visitor doctor, Dr. Veena Rai.

In order to keep Tyler away from the Visitors, Erica brought Tyler to someone he loves more, his father Joe Evans. Tyler was very happy to see his father. While barbecuing, Tyler apologized to Joe for splitting up him and Erica. Joe denied that that was the reason for the break-up and told him that it was not his fault. Later, Joe asked Erica why she brought Tyler here. She said that he needed to keep Tyler for awhile because work was getting too busy. Joe agreed to take him and told her that Tyler needs to know the truth about his parents and who he really is. Erica then got a call and had to go back to work, leaving Tyler with Joe for a couple weeks. That night, Lisa came over to try to get Tyler back to the mothership. ("Pound of Flesh")

The next morning, Joe met Lisa but was surprised to see her at his house. Joe later called Erica to wonder why Lisa came over, then he said that Tyler needs to know that he isn't his father. Lisa overheard the conversation and told Tyler that Joe has been lying to him. Tyler doubted this and asked if Joe really is his father. However, Joe reluctantly said that it is true. Tyler became angry and ran back home to confront Erica. ("John May")

After Tyler vandalized Father Landry's church ("Unholy Alliance"), leaving behind his camera phone with incriminating evidence, Erica became further concerned for Tyler's well being. Erica called Joe, who met Erica in her office, where she provided Joe with a brief visual presentation on the evils of Visitors. Erica explained that Anna has Tyler in her grips, and the only way to save him is to give him what he wants more: a reunified family.

Later, a birthday present, Joe presented Tyler with a map, showing a route he drove as an eighteen-year-old, and a photo of Tyler's new motorcycle. Joe was present when Anna upstaged the Evans', with the gift of a Visitor Ship pilot license.("Concordia")

Erica and Joe attempt to ferry the hostages and John Fierro out of Eli Cohn's base to safety, but are interrupted when the building explodes (triggered by Hobbes with a Visitor remote device given to him by Thomas). Joe is killed in the ensuing crossfire as Erica repeatedly tries to go back to help him. ("Siege")