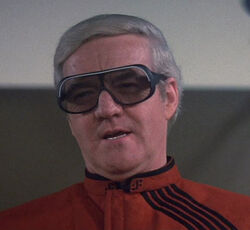 John was the Supreme Commander of the Visitor fleet, in charge of the majority of Visitor operations on Earth during the First Invasion.

John was the Supreme Commander of the Visitor fleet, the first alien introduced on camera on the roof of the United Nations headquarters in New York City. First speaking to the United Nations Secretary-General in his native Swedish, John then invited a group of journalists and politicians to see the inside of the New York mothership. Seeing him on their television screens, the people of Earth thought that Visitors looked exactly like humans.

On the mothership, he gave a small tour to the humans that would ask him some questions about the Visitors. Among them was Mike Donovan, the future co-leader of the Resistance against the Visitors, and Kristine Walsh, which would later lead to Walsh's appointment as the Visitors' official spokesperson. (V: The Original Miniseries)

Being well-trained or well-prompted in public relations, John nevertheless was either extremely busy touring the fleet attending to command issues or reclusive when not needed to promote goodwill amongst the people of Earth. His appearance at the Los Angeles Medical Center on a worldwide broadcast to announce a cure for cancer was used by the Resistance to unmask him, showing the people of Earth that the Visitors had been deceiving them. The Visitors later claimed that his true reptilian appearance was merely a deception being perpetrated by the Resistance.

John was later persuaded by Pamela and Steven to restrict Diana's command responsibilities. After he refused to carry out the Leader's order to destroy Earth when the Resistance routed the Visitors' ship, Diana killed him as she believed that she could attend to the matter herself, declaring that he was little more than a figurehead whose main task was public relations, while she was the one who was responsible for most of the necessary day-to-day tasks of the invasion and crushing the Resistance. (V: The Final Battle)

Retrieved from "https://v.fandom.com/wiki/John?oldid=14544"
Community content is available under CC-BY-SA unless otherwise noted.