Edit
watch 01:25
Jurassic World: Dominion Dominates Fandom Wikis - The Loop
Do you like this video?
Play Sound
John May 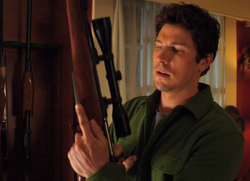 For the episode, see John May (episode).

John May was the founder and leader of the Fifth Column. He was also a Visitor.

Ryan Nichols brings up John's name to Georgie Sutton. Georgie believes May's a myth, but Ryan assures him he's real, and he has bodies and cash. Later, when Cyrus' remains are found, the words "John May Lives" were spray-painted on the back of a door.("A Bright New Day")

Later, in the episode "Pound of Flesh", the words "John May Lives" were scrawled in red as an interruption in a broadcast by Anna.

In "John May (episode)" it is revealed that he was being hunted by Ryan and later was killed by him but not before teaching Ryan the good of emotions.

Whilst John May is believed to be dead, an interview on IGN suggested that he might still be alive. Regardless, its said by Executive Producer Scott Rossenbaum that "we haven't seen the last of him."