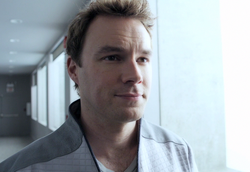 Joshua is a Visitor and a member of the Fifth Column. He serves as the chief medical officer of the Visitor fleet, and lead medical officer aboard the New York Mothership. He played a vital part in passing information on to Ryan Nichols, Erica Evans, and other Fifth Column members about Anna's plans and events happening on the mothership until he was exposed and near-fatally shot by Evans on his orders so she could maintain her cover. Healed by Marcus on Anna's orders, Joshua, having lost his memory of working with the Fifth Column, returned to duty, once again loyal to Anna. Later, however, Joshua regained his memory and, finding his humanity again, rejoined the Fifth Column

Joshua assisted Dale Maddox after he was injured and left with post-traumatic amnesia. Making a construct based on Dale's neuroscans, Joshua helped him recover his memory. When Joshua found out that Erica attacked Dale, he said that she would make an excellent ally. Dale realized who Joshua was and tried to attack him, but he suddenly woke up from his memory construct. Joshua then injected Dale, killing him, and introduced himself as Fifth Column. ("A Bright New Day")

Anna learned about Dale's murder and demanded Joshua to investigate. When Joshua and his assistant David reported that they had no leads, Anna had them gather the entire staff. David, also a Fifth Column member, insisted that Joshua leave the mothership as he is the Column's best hope, but Joshua refused.

With the medical staff assembled, Anna announced that if the guilty party did not come forward, she would randomly choose someone to set an example. A conflicted Joshua was about to confess, but David sacrificed himself and stepped forward instead. Anna then ordered Joshua to skin David.

Later, a reluctant Joshua prepared the skinning of David, who was immobilized on an operating table. David told Joshua that his death would be meaningless if he did not follow through. Because Anna suspected him, Joshua had no other choice but to skin David alive. Joshua was later seen wheeling his cart of blooded surgical tools and trying to resist the effects of bliss. ("It's Only the Beginning")

Anna wanted to make an army to crush the Fifth Column, so she told Joshua that soldiers from the other motherships were to report to him for full medical examination before she were to meet them. After selecting the best soldiers, Joshua told them that Anna would choose one to mate with to build her army. ("Welcome to the War")

With the Fifth Column starting to become a real threat, Anna ordered everyone to be tested to see if any were feeling human emotion, specifically empathy. Ryan, while infiltrating the mothership to obtain phosphorus for Valerie Steven's pregnancy, was brought by Samuel to be tested. After Ryan failed, Joshua introduced himself and Samuel as Fifth Column. Joshua said that he would embed a message for Ryan and told him about a comms device in Reedsville. During Anna’s broadcast, Joshua managed to hijack her signal and embedded the message "John May Lives". ("Pound of Flesh")

Ryan found the comms device and asked Joshua to locate Georgie Sutton, who was captured on the mothership. When he found Georgie, who was at the edge of life, Joshua told Ryan that he could smuggle Georgie onto an outbound shuttle. However, Georgie wanted Joshua to kill him, saying that the resistance was bigger than him now and that he was ready to see his family. Joshua injected Georgie, and he died quickly. ("John May")

Joshua informed Lisa that she was the last one to take the empathy test. When Lisa failed, she told Joshua that her assignment with Tyler Evans must have distorted the results. However, he told her that anyone who failed would be immolated, no exceptions.

Joshua told Samuel about Lisa's failing the test, and that she could be a great asset against Anna, but Samuel disagreed. Instead of telling Anna that Lisa failed, Joshua lied and said she passed. He later told Lisa that he did this because someday he would ask a favor from her, and she would comply. ("We Can't Win")

After finding out that a half-human/half-Visitor hybrid baby existed, Anna ordered Joshua to dissect the parents and destroy the baby once they were found. Joshua then warned Jack Landry and Kyle Hobbes via the comms device that a Visitor soldier was after Ryan and Valerie. ("Heretic's Fork")

Because the V soldier was stopped, Anna planned to release a shuttle filled with Visitor trackers to hunt down the Fifth Column responsible. Joshua told Ryan about this, and Ryan said that he was going to blow up the shuttle. Joshua then gave Ryan the V code to upload into the seeker electronics of the missile's computer chip to breach the shuttle's defenses. ("Hearts and Minds")

After Lisa was attacked, Anna, Marcus, and Joshua went down to the healing center. Joshua was instructed to heal her legs but leave the gash and bruises on her face for the world to see. Later, Joshua met with Erica face-to-face for the first time outside Lisa’s room. He told her that Anna was the one who attacked Lisa and that Lisa would not hurt Tyler. Joshua was later seen with Lisa during bliss, which now had no effect on either of them. ("Fruition")

With waves of guards being sent throughout the mothership, it became more difficult for Joshua to communicate with those on the ground. He told Lisa about the favor she owed him and gave her a blue energy grenade to blow up Anna’s eggs. Although she took the grenade, she did not comply.

Later, Joshua refused a message from Chad Decker, denying that it was for him. Samuel tried to send a warning message to other Fifth Column about Chad, but they were caught. Samuel was taken away by guards while Joshua was put in a blue energy force field to be dealt with later. Chad came back into the room, and Joshua told him that the Fifth Column was trying to save humanity and that Anna gave him an aneurysm. Afterward, Lisa freed Joshua and told him that she gave the blue energy grenade to Erica. Before Joshua left, Lisa said that he was very brave, and he responded by calling her his queen.

Afterward, Joshua caused a diversion so that Erica could destroy Anna’s eggs. He then had Erica shoot him to prevent any suspicion as to what side she was on. At the start of the prematurely-commenced second sequence of the Visitors’ plan, Joshua was brought back to life by Marcus. ("Red Sky")

Although Joshua has been revived, his entire memory of being in the Fifth Column was completely erased. Lisa reached out to him for guidance (herself now being the only Fifth Columnist on the mothership), but she left hastily when he suggested that her behavior was not fitting for the next queen.("Red Rain")

The only one of Joshua's memories that the V physicians are able to reconstruct immediately is Erica Evans shooting him- recovering any more will take time. Anna takes advantage of his restored loyalty and orders him to begin experimenting to find the human soul. ("Serpent's Tooth")

Anna begins to suspect Lisa's loyalty, and asks Joshua to test her by telling her that his feelings coming back. Joshua also informs Anna that Lisa has been accessing medical files. Meanwhile, Anna also reveals to Joshua that she has one last queen egg, which she kept in the event of Lisa's rebellion. She tasks Joshua with experimenting with growth acceleration on Ryan's hybrid daughter, with the goal of developing a safe way for the egg to mature quickly. In the experiments, Joshua reveals that the hybrid has healed her own pains, and no longer needs Anna's bliss for comfort.

Joshua is in charge of the DNA harvesting of the live-aboards. When the potential breeding partners for Lisa start to die of a mysterious illness, Anna charges Joshua with finding the cause and cure. Joshua also reports that his experiments have been successful, and that the queen egg is safely maturing rapidly.

Following his escape, Ryan Nichols confronts Joshua, demanding that he remove his daughter's need for bliss (unaware that she no longer needs it). Ryan tell Joshua that even though he doesn't remember the Fifth Column, his feelings will return because emotion is a part of him. ("Uneasy Lies the Head")

A few days later, Joshua sees Lisa sneak into the Blue Energy Containment Room. Something about the incident sets his mind off, and his memories of emotion and his Fifth Column loyalties return. Seeing Thomas and two guards approaching, he follows Lisa and helps her quietly escape. With a smile that no loyal V would have, he tells her that his memories are back.("Devil in a Blue Dress")

When Diana and the Fifth Column unveil their final plan to destroy Anna, Joshua's role is relatively minor. He is to meet up with Ryan and break Diana out of her dungeon, then facilitate a reunion between Ryan and Amy. The first part of the plan is successful, but word reaches them that the rest of the plan has failed and that Anna is still alive. Joshua and Ryan insist that Diana leave immediately, but she insists on trying to sway the Visitors back to her side anyway. Joshua and Ryan blend in with the crowd during Anna's return. Powerless to stop it, Joshua is present at the birth of Anna's new queen egg, and is forced to go along with Anna's plan to place her in a skin identical to Lisa's, which indirectly leads to Tyler's death after Anna has the queen mate with him. ("Mother's Day")