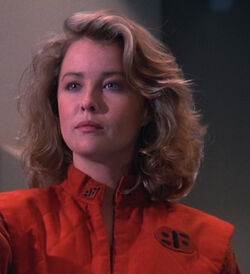 Juliet "Julie" Parrish was a fourth-year medical student and protege of Doctor Rudolph Metz and a friend to Doctor Benjamin Taylor at the time of the First Invasion.

When the Visitors arrived, she saw such an event as a chance to further scientific reseach, to be specific, study the DNA of the aliens. She learned very soon, however, that with the Visitors arrival, new problems came to Earth. One day, she started looking for the people that understood, just like her, that the Visitors posed a serious threat to the humankind.

She founded the Resistance in Los Angeles and created the cell-structure organisation method that would remain essential to the organisation's survival. She initially became despondent over leading the Resistance, as she was a scientist, not a soldier, but was comforted by Ruby Engels, that she was the most suitable person for the post of their leader.

As the months continued, the members of the resistance saw her more and more as the leader of the group. She was the lead person in the assault at the medical center and personally ripped John’s mask off in front of the world. However, in their escape, she became separated from the group. During an attempt to flee in an ambulance, the truck was crashed after Daniel Bernstein shot Fred King. Julie was pulled out of the wreck and held at gunpoint by Daniel until Diana arrived. After Diana slapped her and stating that she needed an "attitude adjustment", Julie was kidnapped and taken to the mothership to undergo the conversion process. Diana decided to personally supervise Julie's conversion, claiming she would be her "mast

1 of 23
Add photo
erpiece". Julie was stripped and placed in the conversion chamber. It was discovered that she had a congenital heart condition and that she had a fear and loathing of anything abandoned or deserted. Diana began her attempt, making Juliet hallucinate that she was wandering errie hallways, being pursued by some unseen creature. Julie was able to deny this was happening. Diana increased the power to mode 2 and Julie imagined that she was being attacked by some sort of monster. Again, she was able to fight off the hallucinations, forcing Diana to increase the power again to level 3. As a blue beam of light spun rapidly arround her, Diana offered to help Julie. She raised her hands to accept, but at the last moment, realized what she was doing and yanked them back to her sides. In her visions, a lizard busted through a wall towards her. She suddenly went into cardiac arrest and nearly died.

Determined to break Julie, Diana continues the conversion process on Julie. Despite a warning from her technicians that it could be dangerous, she upped the power of the chamber to maximum. As she screamed in intense pain, Julie began to imagine that she was being chased by a large creature. She runs faster, but is unable to escape their pursuit. As her heartbeat became irregular again, she comes to another door and a large snake strikes at her. It proved to be too much for her and Julie is finally broken. Diana offers to help her and Julie's arms reach out for her. Diana askes her what she wants and Julie says to be hers and begs for her to stop the pain. With Julie converted, Diana ordered the chamber shut down. Without warning, Mike Donovan bursts into the room. Just as he was about to shoot Diana, Jake killed Donovan, which proved to be a setback in Julie's conversion. However, it turned out to be a fifth column member dressed to look like Donovan. Martin recommended that all important prisoners be transferred to earth. During the transfer, Julie was rescued by the Resistance. However, during this attack, Ruby was shot and killed by Daniel.

After her return, Ham Tyler tried to take leadership of the group, stating that Julie “thinks like a lizard now”. While the group did state their concerns about Julie’s condition, they backed her instead of Tyler. She had doubts of her own, as she caught herself using her left hand on more than one occasion. She voiced these concerns to Mike Donovan and a romance blossomed between the two. She brought them information on the pumping station and assisted in planning and carrying out the successful attack. However, during the attack, she noticed more lingering effects of her brainwashing.

Sadly many of her friends, such as Benjamin and Ruby, died during the conflict. She delivered Robin Maxwell's hybrid babies and, when the largely-Sirian infant died, discovered the organism in its corpse that was the basis for the Red Dust toxin.

Julie was part of the assault team on the Los Angeles Mothership, and successfully seized control of its command center. However, Diana was able to use her conversion of Julie to stall her long enough to escape. With the self-destruct disabled and the Visitors unable to remain on Earth due to the Red Dust toxin now in the planet's atmosphere, Julie returned to Earth with the Mothership under Resistance control.

One year after Liberation Day, Julie was working for Science Frontiers, the corporation responsible for mass production of the Red Dust. By this time she ended her relationship with Mike, because "she didn't have time for anything else". Juliet was put in charge of research of the captured Mothership by Nathan Bates (who seemed to have developed a romantic attraction for her, but she did not reciprocate). She tried to access the secret area onboard the mothership, but Diana had put a security code on it before she left in her fighter.

When the Second Invasion began after Diana's escape, Julie joined the reformed Resistance movement, but served in a lesser capacity, as she had to retain her position at Science Frontiers to throw off suspicion. Her place as leader was succeeded by Mike Donovan. She initially served as a Resistance's mole at Science Frontiers, smuggling information to the group and accessing the company's highly advanced technology to their advantage.

Eventually, Mr. Chiang, the head of Science Frontiers security, exposed her as a spy and Julie was forced to flee. Despite being forced underground, she nonetheless served as an important member, and served as the coordinator and organizer for many Resistance operations across the United States. Diana and her assitant James tried to kill Julie, but failed to do so as were placed under arrest by Philip.

Retrieved from "https://v.fandom.com/wiki/Juliet_Parrish?oldid=14683"
Community content is available under CC-BY-SA unless otherwise noted.