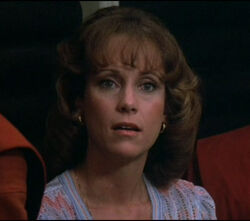 Kristine Walsh was a television journalist at the time of the First Invasion. She later became the Visitors' official spokeswoman.

Being a well-known journalist of her time, Kristine was among the people that were invited to the United Nations headquarters to attend the first meeting between the humans and the Visitors in New York. There she met her old friend and colleague, Mike Donovan, that had just returned from El Salvador.

Kristine was also one of those who were invited to see the inside of the Mothership, joining the group of politicians and journalists that were offered an excursion by Visitors' Supreme Commander John, during which Kristine met Diana.

Having seen Kristine as a professional journalist that presented the Visitors in the most pleasant way, she was soon spotted by Diana, who offered her to be the spokesperson of the Visitors. The young journalist could not afford to lose such an opportunity as to raise her ratings, so she agreed to bring the word of the Visitors to the citizens of Earth. (V: The Original Miniseries)

She remained a loyal servant to the Visitors' cause for many months, but began to doubt her employers' unselfishness when Mike Donovan told her about the people stored aboard the ship to be converted into food supplies and slaves, and about his son to be one of the kidnapped.

Despite being suspected by some of the Visitors as being sympathetic to Resistance ideals, Kristine was asked to make the coverage of the meeting at Los Angeles Medical Center. She was present at the ceremony during which John made an announcement about the medical aid against all forms of cancer when a group of rebels started the attack in the building. Juliet Parrish managed to strip the skin off the face of the Visitors representative, thus revealing the true appearance of the aliens to the public. During this set of events, Kristine came to the idea that she might have been wrong about the Visitors and, rather than trying to "smooth" the thrilling transmission, she commented upon the situation as being the strike of the "Resistance to the monsters" that were trying to take over the planet. While trying to speak the truth on-air, she was brutally killed by Diana. (V: The Final Battle)

Both Kristine and her colleague Mike Donovan served as possible prototypes for the character of Chad Decker, a prominent journalist from the new V series. Just like Kristine, Chad would use the arrival of the aliens in order to gain hints on television and was selected by the aliens to become some sort of their spokesperson.

Retrieved from "https://v.fandom.com/wiki/Kristine_Walsh?oldid=14423"
Community content is available under CC-BY-SA unless otherwise noted.