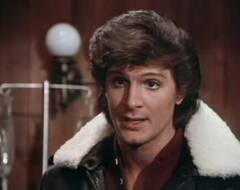 Kyle Bates was a professional motorbike racer, who drifted through life. He was the only son of Nathan Bates. Kyle and his father hadn't spoken since the First Invasion, the time when Kyle was expelled from Stanford University. After that Kyle spent most of his life racing his bikes in Arizona and Nevada.

When the Second Invasion began one year after Liberation Day, Kyle was caught behind the new Visitor front lines and, having shown a hostile attitude towards the Visitor Army, was detained and sent to one of their newly-constructed internment camps. He was later freed by Mike Donovan and Ham Tyler and decided that aiding the Resistance "wouldn't be so bad", especially when he met and fell in love with Elizabeth "Starchild" Maxwell. He began to be a more active supporter to the cause and this brought him into increasing conflict with his father.

Kyle actively participated in the various Resistance operations, uncluding the one, when he assisted Ham in stealing explosives from a Science Frontiers-controlled munitions warehouse, which was filled with confiscated Resistance weapons. Kyle injured a security guard before being captured. This act effectively ended any relationship between him and his father. After escaping custody with Elizabeth's help, Kyle joined the Resistance full-time.

Kyle eventually reconciled with Nathan, but shortly after this reunion, Nathan was killed by Mr. Chiang (whom Kyle killed in turn). Kyle became Ham's protege (earning the nickname "Ace") to hone his skills as a freedom fighter without personal restraint. After Ham left, Kyle took greater risks to himself to save lives and complete Resistance missions across the United States. All the while his relationship with Elizabeth grew.

In the (unaired) series finale, Kyle and Elizabeth both survived an assassination attempt by Diana on the Leader and they narrowly escaped back to Earth. Kyle and the rest of the Resistance were also hunting for the "Anyx", an artifact that could defeat the Visitors amidst the destruction the Visitors wrought upon the world during the temporary Armistice, which the Visitors used to crush the majority of the Resistance.

Retrieved from "https://v.fandom.com/wiki/Kyle_Bates?oldid=14867"
Community content is available under CC-BY-SA unless otherwise noted.