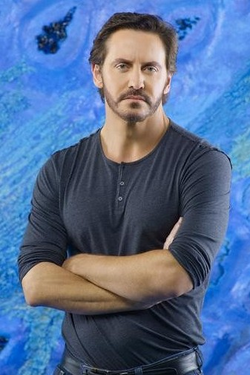 Kyle Patrick Hobbes is a former British Army Special Air Service (SAS) trooper, mercenary, and fugitive on the top of wanted lists for many law enforcement organizations. He is a member of the Fifth Column, initially out of his own selfish loyalty to money, yet with time he grew to be totally devoted to the cause of defeating the Visitors.

Evidence manipulation enables Kyle Hobbes to be framed for the warehouse explosion in Episode 4 It's Only the Beginning. Erica, Ryan, Georgie and Jack recruit him to help train and guide a resistance force. Kyle joins the Fifth Column once he realizes the seriousness of the situation. He is the man for the plans. He tortured a human V helper, He almost killed Ryan and let Georgie go to the ship where he'd die. Despite his harsh tactics, he is an invaluable asset to the Fifth Column. His weapons experience and quick thinking saved many lives. Because he is wanted by both the FBI and the Vs, Hobbes is the only member of the Fifith Column who is in hiding most of the time. His prior training as an SAS trooper allows him to be invisible before, during and after he's made his move. In addition, Hobbes has contacts all over the world. He has called upon his contacts on several occasions when the situation calls for it to get weapons, equipment and information for The Fifth Column.

Hobbes agreed to join the Fifth Column in order to find out why the Vs set him up. In Episode 10, it's revealed Hobbes was hired by an unknown client (later revealed to be an alias that belonged to no one) to kill Lawrence Parker. Hobbes decided not to do it after a check on his client's history doesn't check out. Perhaps angry with him, the Visitors pin the blame of the murders at the warehouse on Hobbes. When Lisa is found savagely beaten, Hobbes is once again framed as the assailant along with his would-be target, Parker. Fed up with being used as a scapegoat, Hobbes breaks into Parker's apartment and steals his hard drive to find out why the Vs wanted him dead. He then makes a call to Marcus to make a deal. When the two meet, he offers Parker's research in exchange for a clean slate and a pile of money. Nodding in agreement to the deal, Marcus leaves.

In Red Sky, we learn why Kyle was framed by the Visitors for the warehouse explosion and the assault of Anna's daughter. Marcus wanted to hire Kyle to infiltrate the Fifth Colunm, to which Kyle disagreed and said that he can run off and the V's will never find him, to which Marcus replied that they have found "her", which leaves Kyle stunned. It is also revealed that Kyle has been working for the Visitors long before their arrival.

In an attempt to end the strife with the Visitors, Hobbs and Eli Cohn fail to assassinate Anna and instead take out her "right hand" Marcus.

When Erica takes over as head of the Fifth Column, she trusts Hobbs more as a warrior. Hobbs also witnesses the death of Joe Evans.

While on assignment in Hong Kong they fall in love and engage in an intimate relationship, and the two become partners in the Fifth Column movement.

Later, when returning to headquarters, Hobbs vanishes with all the equipment. His fate is unknown.