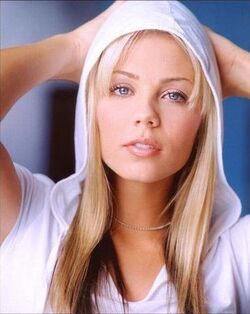 Born on September 22, 1984 in Toronto,Ontario, Canada, Vandervoort was involved in several sports such as football, karate, basketball, tennis, gymnastics, and baseball. Entering karate at age seven, she earned a second degree Black Belt from Northern Karate Schools by the age of 16.

After taking several classes and doing background work on Canadian shows such as Road to Avonlea and Harriet the Spy, she got her first speaking role in Canadian children's series Goosebumps (three episodes) and Are You Afraid of the Dark?.

After commercials and guest-starring roles on Mutant X, Prom Queen, Twice in a Lifetime, Doc, Sue Thomas: F.B.Eye, Troubled Waters, The Dresden Files, and a few Disney TV movies (Mom's Got a Date with a Vampire, and Alley Cats Strike), at age 19 Vandervoort landed a lead role as Sadie Harrison on the CTV television series Instant Star, which ran for four seasons.

In 2006, Vandervoort shot her first feature titled The Lookout with Jeff Daniels, Joseph Gordon-Levitt, Matthew Goode, and Isla Fisher. Several other TV appearances such as CSI: Crime Scene Investigation led Vandervoort to the role of Clark Kent'sKryptonian cousin "Kara Kent" (the woman destined to become Supergirl) on the CW series Smallville. She was a regular in season seven, and appeared in the "Bloodline" episode for season eight.[2] She then returned for another episode called 'Supergirl' in the 10th and final season of Smallville..[3]

Following the CW and Smallville, Vandervoort then shot the sequel to the feature film Into the Blue titled Into the Blue 2: The Reef. She next filmed an independent production titled The Jazzman, which also starred Canadian stars Michael Ironside (who appeared in the second V mini-series as well as the 1984 V regular series) and Corey Sevier.

Vandervoort currently portrays "Lisa," an extraterrestrial Visitor, in the 2009 ABC series V, a reboot of the 1980s science fiction franchise of the same name.

In 2010 Vandervoort appeared in the two-part miniseries Riverworld in which she plays Jessie Machalan, the fiancée of war correspondent Matt Ellman who wakes up after death on a planet populated by everyone who has ever lived on Earth.[4] It as also been announced on her official website that Laura has been attached in a feature film called Entitled, which also stars Ray Liotta and Kevin Zegers. During her appearance at San Diego Comic-Con in 2010, it was confirmed that she will be returning to Smallville in season ten's third episode (entitled "Supergirl", to air in October 2010).

You may recognize Laura from the following: