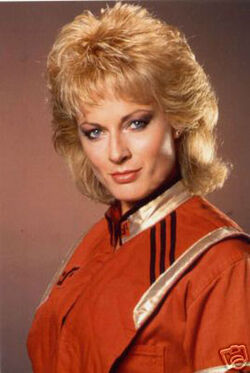 Blonde, British-accented Lydia was commander of the Earth fleet while Diana was being held prisoner on Earth. Lydia rose through the ranks to attain the rank of Chief Security Officer. While every bit as power-hungry as Diana, Lydia was far less sadistic. She had a propensity to inform on Diana (for whom she had little respect) to the Leader and overseers such as Philip and Charles.

When Diana returned to the fleet, she took control from Lydia, who was none too thrilled. She was horrified when Diana diverted the Particle Beam Triax diverted from its assignment to protect the homeworld. While Diana went to sign a peace treaty with Nathan Bates, Lydia was left in charge and under her watch that Robert Maxwell destroyed the Triax with the stolen mothership.

Soon afterwards, she aided Diana by providing information on Kyle Bates, who Diana wanted to use against his father. Unfortunately for her, Mike Donovan and Ham Tyler foiled her plot.

Lydia was unconvinced that Diana’s next plot would work as she watched Diana and a converted Sean Donovan trying to extract information from his father through trickery. She was given the job of killing Donovan afterwards but he surprised her, knocking her out.

She continued to work begrudgingly under Diana until Diana started converting a pacifist Visitor icon, Jacob. After Donovan and Tyler rescued Jacob and he got killed while on the run from shock troops, Lydia had enough and flew back to the Leader. Diana ordered that the mothership destroy Lydia’s shuttle.

Lydia surprised Diana later on, by arriving with the new Supreme Commander, Charles. It seemed that she had sent a decoy in her place and she took another shuttle.

Upon Charles’ arrival, Lydia was made his adjutant and Diana was placed under her. Not too long after, due to Diana’s grudge, the Resistance was made aware of Lydia’s arrival on Earth. She was kidnapped by Donovan and Juliet Parrish and interrogated. Donovan tricked her into revealing Tyler’s location, allowing them to rescue him.

A prisoner exchange was set up. Despite the whole event turning into a giant firefight, Lydia was able to escape with Charles and Diana.

Not too long afterwards, Lydia set up an operation with Lt. James, a covert operations specialist. James and his men attacked Science Frontiers while dressed as Resistance members, framing them. She witnessed Charles’ plan to eliminate the resistance leaders unfold due to a daring raid from the Resistance and Donovan slips away from Charles.

Lydia began to grow closer to Charles and was jealous that he seemed to be attracted to Diana. When he planned to marry Diana in order to send her home, Lydia was not happy but got over it since it would rid her of her rival.

When Charles became slightly infatuated with Diana, Lydia was driven mad with jealousy. She decided to assassinate Diana on her wedding night by pouring some poison into her ceremonial cup. Diana sensed something wrong and switched cups with Charles, killing him to Lydia's horror.

Diana had her arrested and put on a show trial to simply declare her guilty and set her up for execution. Philip, the Inspector General, showed up just in time to stop the execution. A new investigation pitted Diana and Lydia as the main suspects, forcing them to team up to frame someone else or they both would be judged guilty. They framed the ship pharmacist, Marta, and she got shipped off to space with Charles’ corpse.

Soon afterwards, Diana came up with a scheme to rid herself of Philip and Lydia. She set Philip up to be assassinated by assigning her underling Angela to Philip’s expedition to kill Donovan. Diana proceeded to talk to Lydia, getting her to say that it was a great idea and that Philip would be out of the way and she would take over, while Diana recorded the conversation. Unfortunately for Diana, Angela failed.

Diana's next schemes involved bringing Lydia’s brother Nigel onto the ship before it was his time, right in time for the ship’s feast of Ramalon, which involved the sacrifice of the youngest serving officer. When Lydia figured it out, she did almost anything as she appealed to both Philip and Diana. Philip told her that the only way to stop it was with an unanimous vote of the ship’s three line officers: himself, Lydia and Diana. Lydia went to Diana and asked her what she wanted. Diana offered her Nigel’s life for hers. During the feast of Ramalon, Philip halted the sacrifice accusing Diana of making unfounded accusations of him being in the Fifth Column. Philip declared that he would consider it mutiny unless Diana changed her vote and Nigel was saved.

When the war ceased, Lydia welcomed the Resistance aboard and became friendly and civil with them.

Although power hungry, Lydia claimed that her sole purpose was to serve the Leader. Throughout the series, she tried to kill Diana, believing her to be more of a threat to the Visitors then to Earth (though her true intentions may had been to rise to commander of the fleet again). Lydia was shown to be incredibly vain at times, and she had absolutely no respect for anyone aside from herself, her brother Nigel and the Leader. (V: The Series)

Retrieved from "https://v.fandom.com/wiki/Lydia?oldid=14701"
Community content is available under CC-BY-SA unless otherwise noted.