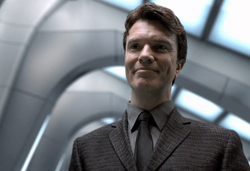 "Tell Erica, if we can't cut the head of the beast. We could at least rob it of it's right hand"

Marcus is a Visitor and Anna's second-in-command on-board the New York mothership. He was inactive as he was shot by Kyle Hobbes of the Fifth Column, taking a bullet meant for Anna. However, he has recovered and is once again Anna's second-in-command. He was previously close to Diana, who still considered him to be the most loyal of her old followers still in Anna's employ.

Marcus accompanies Anna to her first interview and questions with the media. When it is over Anna tells Marcus that she wants Chad Decker. 3 weeks later, Marcus goes to Prime Focus News and asks Chad to do the first interview with Anna. Chad agrees and the interview takes place in the Mothership a few days later.("Pilot") After the interview Marcus tells Chad that Anna loves him and will contact him again if she needs to something important to the people again.

He is with Anna when she is attemting to present a good image to the diffrent countries of the world and is confused by Anna's use of human customs. Anna simply replies that Marcus just dose not understand humans and how to manipulate them.

When Anna attempts to screen for Fith Colum V's Marcus finds her methods to be draconian; arguing that even withought emotions the V's that were suspected of having emotions woudnt kill themselves due to self preservations instincts and the test was not 100% accurate.

Unlike many of the V's Marcus is capable of operating on his own or behind Anna's back. He attempts to blackmail Hobbs in to working for the V's. He is also seemingly immune to Anna's bliss due to his ability to function during a mass bliss without being affected himself.

When Anna, enraged over the death of her soldier children, initiated the next phase of the invasion, Marcus tried to stop her, even going so far as to attempt to physically restrain her, protesting that it was too soon. Anna ignored him and proceeded anyway. Marcus later supervised the revival of known Fifth Columnist Joshua; it is not clear if he was doing so on Anna's orders.("Red Sky")

It is revealed that he revived Joshua on Anna's orders. He told Anna that the captains of the 29 motherships wanted to meet with her, because they believed that reason for the sudden release of Red Sky was because Anna had Human emotion. Anna killed the remaining 6 soilder babys from her last batch to prove to Marcus that she didn't have emotion. When the captains met with Anna, Marcus witnessed the death of visitor captain. He then told her that Eli Watts was close to discovering what red sky was. Anna then told him to send tracker 1 to spy on him. ("Red Rain")

In Serpent's Tooth, as the worldwide Fifth Column detonate 29 explosion in the 29 cities in Visitor installations, Sarita Malik steals a piece of a evidence from the New York suicide attack, and gives it to Marcus who says "Your Queen will be pleased" and gives the evidence to Anna, to which she wants those responsible caught and brought to her. Anna says that Ryan is the one who can stop this threat, to which leaves Marcus curious as to one Visitor; a traitor is the way to stop this threat. He then says how can Anna control him, to which she says "because I have something more powerful than bliss." and puts skin on the child. Further on in the episode, Marcus one of the V technicians who are responsible for reconstructing the attack from the piece of evidence, but is told it cannot be performed, however a trace on the fabric was of a company owned by Eli Cohn, to which Marcus orders the technician to send Malik there to investigate.

Sometime later he told Anna that Sarita Malik was missing.("Laid Bare") He also told her about Eli Cohn("Unholy Alliance")

He usually questioned Anna's decision to trust Ryan Nichols, since he was a traitor and resisted her bliss, but Anna replies that Amy is the key to control Ryan.

When Anna came down to Earth to tell humans about gala concordia and about her supposed plans of working together, Marcus was contacted by Ryan Nichols and was told of the Fifth Columist"s plan to assassinate Anna. He took Anna's place, resulting in him being shot by Kyle Hobbes.("Concordia"). The shot was noted to have just missed his heart and scarred the human skin of the wounded area. Marcus was not seen again for several weeks; though he did survive, his recovery was very slow. Following the escape of Ryan Nichols, Lisa visited him and revealed that Diana is alive.

As soon as he was able Marcus visited Diana and demanded an explanation. Diana explained that when she decided to scrap her plans to take over Earth, Anna experienced her first human emotion- pride- and overthrew her mother. She also noted that Anna's pride almost got Marcus killed. Marcus insisted that Anna was his queen now that that he should report his conversation with Diana to her. However, unnerved by Diana's certainty that her daughter was experiencing emotion, Marcus observed Anna's behavior through the incidents of the next few days. Marcus also cautioned Anna against trying to bliss humans, reminding her that Diana had determined that it was impossible. Anna ignored him and tried anyway, barely succeeding and shocking Marcus.

Marcus later assisted Diana and the Fifth Column in their plan to assassinate Anna, quietly encouraging her to give in to the Fifth Column's demand that she arrive in person to rescue her daughter. He was as distressed as the rest of the Fifth Column when it turned out Lisa could not go through with it. He watched in silence as Anna killed Diana and imprisoned Lisa. Marcus later came clean to Anna about his involvement with Diana, and asked for death. Anna granted him mercy, as she was

convinced that he has been acting in what he felt was the best interests of their species with the information he had. She warned him, however, that this was a one-time deal, that she would kill him the next time he betrayed her. Marcus later attempted to dissuade Anna from blissing the entire human population, and was shocked when Amy stepped in to help Anna succeed.("Mother's Day")