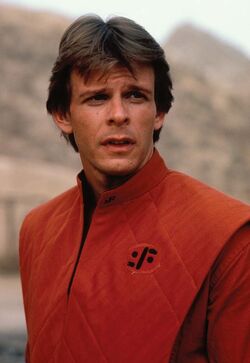 Mike Donovan was a news cameraman at the time of the First Invasion. He later became one of the leaders of the Visitor Resistance.

The son of Eleanor Dupres, ex-husband of Marjorie Donovan and father of Sean, Michael Donovan was a news cameraman, who was partnered with Tony Leonetti to document stories around the globe for television news.

Mike first witnessed a Visitor mothership arriving while in El Salvador (where he learnt the basic rules of being a freedom fighter from local rebels) when he and Tony were making a news report about the local military conflict, during which they got almost killed.

The two teamed together again and joined other journalists on the roof of the United Nations headquarters. It was there that Mike met his old friend Kristine Walsh. After a small meeting between the Visitors Supreme Commander and the UN Secretary-General, Mike and others were invited for a small tour aboard the New York City Mothership. Mike initially thought the Visitors were friendly, but when Tony pointed out suspicious activity among high-ranking scientists (at a time scientists were becoming increasingly ostracized), Mike and Tony attempted to sneak aboard the L.A. Mothership to discover the truth. Unfortunately, they were ambushed on the landing platform and were separated.

Lieutenant Martin, a Visitor whom Mike had befriended, was secretly the leader of the Fifth Column - a Visitor movement dedicated to bringing peace to their people. He freed Mike and revealed that Tony had been experimented to death by Visitor scientist Diana. Martin then helped Mike, Robin Maxwell, and Sancho Gomez escape in a shuttle back to Earth, as well as revealing why the Visitors had come: as their own world was dying, their plan was to kidnap the population of Earth for food and steal the entire world's water supply.

Upon his return to Earth, Mike joined the Resistance led by Juliet Parrish, in order to stop the Visitors' plans. Mike also became one of the Resistance leaders and more valuable members, in part due to the freedom fighting methods that he learned in El Salvador. (V: The Original Miniseries)

He also developed a romantic relationship with Julie and a crude friendship with a gruff and experienced Resistance member named Ham Tyler (who gave him the nickname "Gooder" -short for "Do-gooder"- for his unending help to others despite risks to his life). When the time came to decide whether or not to use the newly-created Red Dust on the Visitors, Mike vouched for it and was supported by Elias Taylor and several other key members of the Resistance leadership.

He and Martin, who had now mobilized his movement to openly help the Resistance, led the attack on the L.A. Mothership and stopped the self-destruct, intended to destroy the Earth. He then took the ship, now under Resistance control, back to Earth victorious. (V: The Final Battle)

One year after the Final Battler, Mike returned to his job as a cameraman (this time with Martin as his sound operator), and was poised to become a full-time anchorman, but his relationship with Julie had ended. However, he now had a world-wide reputation of a freedom fighter and "Hero of the Resistance".

During the Second Invasion, Mike and Tyler joined up with Resistance, now reunited by Julie Parrish, and resumed the war against the Visitors across the United States.

When Diana was supposedly "assassinated" by an agent of Ham Tyler, Mike and Martin decided to pursue and corner her at Tyler's hideout. While watching the place, Martin knocked Mike out and attempted to kill Diana himself. However, he failed and died due to a lack of pills that protected him from the Red Dust virus. Martin managed to warn Mike of Diana's plan to re-invade the Earth before dying in his arms.

Later, Mike joined up with Tyler to hunt down and kill Diana, but failed to stop her from escaping the planet and returning to the Visitor fleet. Donovan caught up with Diana at the southwest tracking station. Realizing that Diana was already calling the second orbital fleet, he planned to keep Diana Earth-bound long enough for the Red Dust to take effect. When Mike yelled that she didn't have much time, Diana noticed her timer had nearly run out and, bailing out of a short gunfight, headed for the rooftop.

Donovan beat her there and she shot at him. Seeing the Visitor shuttle approaching, Mike realized he had to act quickly. Diana made a run for it as he tried to stop her, hitting her in the chest and twice in the back before she escaped. Once inside the shuttle, Diana pulled a bullet shell fragment from her uniform, observing "What a primitive planet." ("Liberation Day")

Mike became more independent when Tyler left for Chicago. He also formed a friendship with Philip, Martin's twin brother and new leader of the Fifth Column. Mike became the primary leader of many Resistance cells, going across the world to fight the Visitor armies, becoming a symbol of hope to the human race and even gaining the grudging respect of the Visitors themselves, who made him into the Most Wanted Man on Earth.