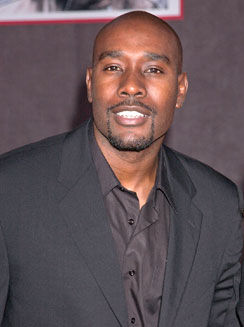 Morris Chestnut was born on Januray 1, 1969 in Cerritos, California. He has 2 children with his wife Pam Byse. A tall, handsome, and versatile black actor, Morris Chestnut first came to be recognized by moviegoers starring as Ricky in Boyz n the Hood (1991), a role where he played a high school running back using his football skills to escape the violent surroundings of his South Central Los Angeles neighborhood. His half brother was played by Ice Cube who, in the movie, did not have the same motivation. Two years later, he landed a lead role in Civil Rights Drama The Ernest Green Story (1993) (TV), a movie where he showed courage and perseverance as one of the Arkansas Nine high school students. He later starred in Action flicks Under Siege 2: Dark Territory (1995) and G.I. Jane (1997), and Half Past Dead (2002). Recently, he has been more involved with romantic comedies, starring in The Best Man (1999/I), The Brothers (2001/I), Two Can Play That Game (2001), and Breakin' All the Rules (2004). This year, 2004, he will also be starring in Anacondas: The Hunt for the Blood Orchid (2004), and Ladder 49 (2004).

You may recognize Morris from the following: