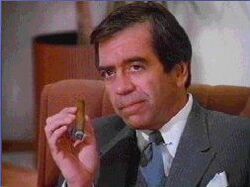 Nathan Bates was the owner of Science Frontiers, the company that was contracted to discover the secrets of the L.A. Mothership after the First Invasion. Juliet Parrish became the chief scientific researcher in his company. It is possible that she was chosen for this role not only because she was a prominent scientist and a well known freedom fighter, but also because Nathan held an undisguised attraction for this woman.

After the first Visitors demise and prior to Diana's trial, Nathan contacted Ham Tyler and hired him to fake Diana's death and bring her to him. However, Diana managed to escape, after which Tyler left Bates and rejoined the Resistance.

Later Nathan would have to barter with Diana, when she began a sudden attack on Los Angeles. She wanted to kill him, but had to change her plans, when Nathan told her about a secret store of Red Dust toxin that he would release into the atmosphere should he be harmed. Diana was forced to deal with him, and Los Angeles was set up as an Open City, where humans and Visitors could both walk unarmed.

This proposal was mainly accepted negatively among the people, including Juliet Parrish, but Nathan explained that he was merely buying time until another toxin could be discovered. In the end, Nathan's thirst for power gets the better of him.

During his bid for power, Nathan decided to get rid of the Resistance in the city. He had his own son, Resistance member Kyle Bates, beaten by right-hand man Mr. Chiang, and attempted to destroy Resistance Headquarters at Club Creole. When he agreed to participate in the murder of Mike Donovan, by accepting the role of a mediator in a hostage exchange that was set up by Charles, he set the stage for his own demise.

Elizabeth Maxwell, who was herself very much wanted for study by Science Frontiers, sensed the brainwashing that Ham Tyler had received and managed to divert the bullet Tyler was aiming for Donovan. At the critical moment, Nathan jumped in front of the bullet to save the life of his son. The two reconciled, but before Kyle could rescue Nathan from Science Frontiers, Nathan was shot to death by Mr. Chiang.

Retrieved from "https://v.fandom.com/wiki/Nathan_Bates?oldid=14743"
Community content is available under CC-BY-SA unless otherwise noted.