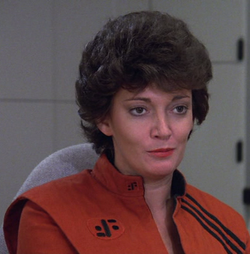 Pamela was a Visitor squadron commander and Diana's superior at the time of the First Invasion.

Pamela's mothership joined Diana's over Los Angeles a year into the occupation of Earth and, as the senior officer, she assumed command over both vessels, much to Diana's anger. Pamela brought specialists and engineers who implemented a project to speed up the acquisition of Earth's water. Pamela scorned Diana's claim of the Leader's special favour, pointing out that her supposed lover had sent her 56 trillion miles away.

After Diana's most trusted aide Martin was revealed to be the leader of the Fifth Column by Mike Donovan under the influence of a powerful truth serum, Pamela and Steven convinced the Visitor Supreme Commander John to relieve Diana of her command responsibilities and restrict her to scientific duties. On that occasion, Pamela told John that she was genuinely fond of Diana, though her attitude and machinations suggest precisely the opposite.

In response to Pamela sidelining her, Diana killed Pamela as well as her guard. Diana later told John that the guard, whom she claimed was a member of the Fifth Column, was responsible for Pamela's death. Underestimating Diana's ruthlessness, John accepted this explanation, which proved to be a fatal mistake on his part as he soon became another of her victims. (V: The Final Battle)

Retrieved from "https://v.fandom.com/wiki/Pamela?oldid=14642"
Community content is available under CC-BY-SA unless otherwise noted.