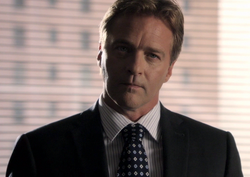 Paul Kendrick is an assistant FBI director of the counter terrorism task force. He is Erica Evans' supervisor.

Paul calls Erica into work when he hears that Dale is missing. He tells Erica to go in to questioning but half way through it his cell phone rings with information regarding Dale. Erica and Paul travel to the warehouse where the Resistance meeting was held and find Dale's car. Paul later finds Erica's message to 911 and further questions her about Dale's disappearence. Erica lies her way out of it again making Paul believe her. ("There Is No Normal Anymore")

some time later he appeared at the embassy where Anna said she was unhappy about lisa he then talked to erica during this about helping her and appeared again in the warehouse fifth column put Lisa and helped chris set up the hidden camera thus resulting in erica telling the truth he is then later revealed to be a Member of Project Ares and was luckily in the underground bunker along with Lars Tremont,erica,Chris,and at least 50 other people when the world was blissed ("Mother's Day")

Retrieved from "https://v.fandom.com/wiki/Paul_Kendrick?oldid=14331"
Community content is available under CC-BY-SA unless otherwise noted.