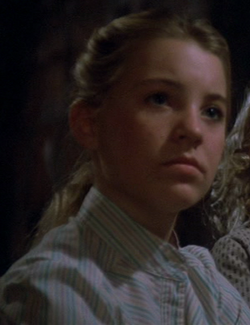 Polly Maxwell is the daughter of Robert and Kathleen Maxwell and the sister of Robin Maxwell and Katie Maxwell. Polly fled with her family and joined the Resistance with Juliet Parrish. Polly, her mother and sister Katie went to the Forest Camp at the mountains while the majority stayed in the city with Juliet. Her father Robert was caught outside after hours and confided in a Visitor that his family was at the Forest Camp when the Visitor threatened to torture Robin, who was previously captured. The Visitor told Robert that he would allow him to warn those at the Forest Camp ahead of time instead of hurting Robin, but betrayed him and he and Diana attacked the Forest Camp anyways. Polly saved her sister Katie while their mother was hurt during the attack. She and the survivors of the attack were transferred to the other base by Julie and were saved.