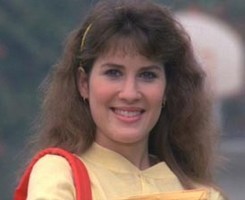 Robin Maxwell was a student during the arrival of the Visitors, that would later join the Resistance movement together with her family. She was the mother of Elizabeth Maxwell.

Robin Maxwell was the 17-year-old daughter of Robert and Kathleen Maxwell, when large alien ships began to appear in the sky in various parts of the world. Soon enough she joined her family, together with her sisters Polly and Katie, to watch the news about the arrival of the unknown guests.

During this time she got acquainted with Brian, a young Visitor from LA Mothership. She believed him to be cute, and soon they became friends.

Robin was an impulsive teenager, who frequently made dangerously foolish decisions. When her old boyfriend, Daniel Bernstein, reported her family to the Visitors after she rejected him, Robin and her family had no other option than to join the Resistance.

One evening Robin, looking forward to exploring the neigbourhood, went outside the Resistance base and was quickly captured by Visitor soldiers and taken to the Visitor Mothership above Los Angeles. It was there, that she was made love to by Brian and left pregnant with his baby. Later Robin was rescued, along with Sancho Gomez, by Mike Donovan and returned to her family.

After realising that she would have a baby from an alien, she decided to abort. However all attempts to have the child aborted failed, and Robin gave birth to twins, a boy and a girl. The largely-Visitor boy died killed by his own Escherichia coli, while the largely-Human girl, now named Elizabeth, survived.

It was revealed, that the combination of Human and Visitor DNA caused the spontaneous development of an organism, very toxic to Visitor physiology. This infection was later refined into the "Red Dust". When Brian was captured to be used in a test of the Red Dust, Robin, who was thirsting for vengeance for using her to create a hybrid baby, used the Dust on him, killing him nearly instantly.

Robin then began to have feelings for her child, after Father Andrew Doyle took Elizabeth away for her own safety. Robin and Elizabeth were reunited, when the Resistance captured the Los Angeles Mothership and returned to the Earth, which was now toxic to Visitor habitation due to the Red Dust.

One year after Liberation Day, Robin was shown to have matured and was more responsible. She joined the Resistance during the Second Invasion by the Visitors. Though she sometimes acted childish, especially when she fell in love with Kyle Bates, who did not reciprocate, but instead had feelings for a now grown-up Elizabeth. After a second attempt was made to impregnate her (as her DNA was the only strand on the Earth that could be manipulated to combine with Visitor DNA), she decided to leave for Chicago, where the Visitors couldn't survive due to the lingering effects of the Red Dust.

Retrieved from "https://v.fandom.com/wiki/Robin_Maxwell?oldid=14355"
Community content is available under CC-BY-SA unless otherwise noted.