"If he wants to be be a human. I'll make sure he suffers like a human" 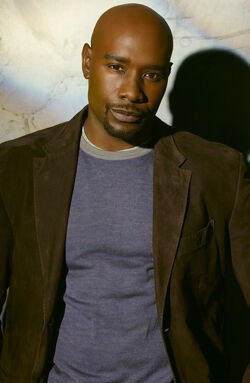 Ryan Nichols is a Visitor and Fifth Column member disguised as a stockbroker, living and working for years on Earth. Upon the arrival of the Visitors, Ryan's past has come between him and his soon-to-be fiancée Valerie, as he faces the inner turmoil of choosing between a future with her and the past that's haunting him.

Ryan Nichols' records indicate he was born to Leon Nichols and Miriam Gregory on 26. May 1969. 12:32 PM in Hawaiian Gardens, California. These records were falsified as part of his V Sleeper cover.

Ryan is buying an engagement ring for his girlfriend Valerie when the Vs arrive. In the following weeks, Ryan is repeatedly contacted by Georgie Sutton, who knows of his past, and is eager for his assistance. Ryan appears at the Resistance meeting as the attendees are being attacked by the Visitors, and comes to the aid of the attendees, killing multiple attackers. He is wounded in the attack, revealing his identity as a Visitor traitor.

Fearing for her safety, Ryan intends to break off his impending engagement with Valerie, who initially suspected him of cheating on her, after ignoring multiple phone calls from "nobody." In her search to find evidence of his infidelity, Valerie finds the ring with which he intended on proposing to her. ("Pilot")

In an effort to heal his wound, Ryan contacts another traitor visitor, Angelo, at his auto body shop. Angelo closes the wound, concealing his reptilian skin, but also drugs him, telling him he can't trust anyone. Ryan regains consciousness after Angelo has left.

Valerie later spots a framed picture that was left upside-down on a mantle. Ryan claims not to have left it that way, and when she rights it, a business card with the name Cyrus on it. Ryan admits knowing Cyrus. Ryan goes to see Cyrus who tries to turn Ryan in to Anna. Ryan then leaves writing on a door, "John May Lives".

Ryan, was out blowing up a lab (again leaving the message "John May Lives"), comes home to find out his human girlfriend Valerie is pregnant. Which will probably result in a human/visitor hybrid. In the 80s version the hybrid was human but with visitor qualities, Valerie then moves on to comment several times about how the baby is growing much quicker than usual. She has unusual cravings, such as rat. She is very confused because she didn't know about his status as a visitor. ("There Is No Normal Anymore")

In Red Rain, Ryan has been still imprisoned on the mothership and experimented on to see how the hybrid was conceived. And so tried to save his daughter, but was captured and sent back down to Earth, because Anna wants Ryan to be back in Fifth Column and there Anna can use him to destroy them by using his daughter against him.

In Serpents Tooth, Ryan attends Valerie's funeral but does cry, attracting unwanted attention, and is questioned if he has a soul or not? And is given a card by a Visitor, so Anna can be in contact with him. Anna placs skin on Ryan's daughter so when Ryan looks at his daughter, he would think of Valerie. Anna also feeds her a mice, so she can use this bond to control Ryan. Anna comes into contact with Ryan, telling him to join the V's again, so he can be with his daughter. Ryan later asks Jack if Ryan has soul, and is told that he is. Anna later makes the child sick so that her bliss can alleviate her pain to control Ryan. Whilst Ryan mourns Valerie at her grave he feels her bliss leaves the graveyard. Later Anna contacts him again and Ryan joins with her, just so his daughter can be blissed.

Ryan tips off Visitor security on the Fifth Column's plan to assassinate Anna at a gala. Marcus tells Anna that Ryan called in the tip and replaces Anna as speaker for the gala. The Fifth Column however takes advantage of the situation and shoots Marcus instead. It is unknown whether he will survive or not.("Concordia")

Ryan is sent by Anna to kill Eli Cohn, but is caught and held captive by Eli Cohn in his warehouse. The warehouse is then detonated by Kyle Hobbes, on Thomas's orders, but Ryan survives the bombing.("Siege")

He approaches Jack for help to get back his baby from Anna, but Jack refuses to give Ryan another chance. Meanwhile, Anna, thinking that the Fifth Column has been decimated together with Eli Cohn, and that Ryan's cover as a collaborator has been revealed, says that Ryan is no longer of use and should be got rid off quietly.("Birth Pangs")

The Visitor guard sent to kill Ryan fails in his assignment, and Ryan goes in search of his daughter. He first confronts Joshua, who informs him that his daughter is with Anna. Ryan does not kill Joshua because they used to be collaborators in the Fifth Column. Although Joshua no longer retains his memories, Ryan says that once he has felt human emotion, it will always remain with him.

Ryan then approaches Lisa for help, and she brings him to see Diana. He is stunned to see Diana still alive. Diana helps Ryan to escape the New York mothership using one of her secret escape pods, and tells him that she will give his daughter her Bliss, even if Anna stops. ("Uneasy Lies the Head") Ryan eventually tries to save his daughter, Amy, from the ship, but due to Anna's lies, Amy believes Ryan abandoned her, and kills him by strangling and snapping his neck with her tail. ("Mother's Day") It is possible he can secretly be revived by Joshua without the Visitors knowing, however, this is unlikely.although he has survived worst.

Ryan Nicholas was partially based on the Visitor youth leader Brian, who appeared in V: The Original Miniseries and V: The Final Battle.

[RYAN NICHOLS] 36 years old, Ryan is the boyfriend of Valerie Stevens, and he's right on the verge of proposing marriage. But Ryan has a deep secret that he's kept from Valerie and from her daughter Amy...