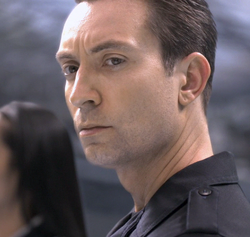 Samuel is a guard and medical officer aboard the New York mothership. He is an ally of Joshua and a member of the Fifth Column.

When Ryan Nichols was checking-in to enter the mothership, he heard a crying baby and appeared concerned. Samuel was suspicious of Ryan and followed him. Samuel spotted Ryan taking a vial of phosphorus for Valerie's pregnancy and took him to Joshua. After Ryan failed the empathy test, Joshua and Samuel introduced themselves as Fifth Column members and said they will embed for Ryan the message "John May Lives" during Anna's broadcast. ("Pound of Flesh")

When Lisa failed the empathy test, Samuel suggested to Joshua that her execution as a traitor would be a great victory for the Fifth Column. Joshua disagreed, feeling that Lisa was actually changing and that she would be a great asset against Anna. ("We Can't Win")

Chad Decker was sent to the mothership to deliver a message to the medical bay. After Joshua denied that the message was for him, Samuel said he will send a warning message to Fifth Column members to not engage with Chad and then erase it so it won't be tracked back to them. However, Samuel did not erase the message quickly enough because guards showed up and took him away while Joshua was left in a blue energy force field to be dealt with later. Although Joshua was later freed by Lisa, Samuel's fate remains unknown at this time. ("Red Sky")