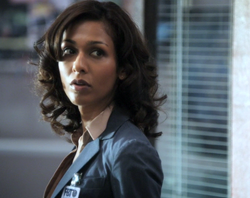 Malik visits Jack at his church in response to the police report that a man died there. Jack is surprised to find that the FBI, instead of the police, are investigating the death. Jack lies about what the man told him and doesn't tell her what he knows about the Visitors. Jack later feels guilty and goes to the FBI headquarters and tells Malik the truth about the man, giving her the photos he provided. Erica becomes enraged by this as she says anybody could be a V ("There Is No Normal Anymore"). Malik works closely with FBI Agent Paul Kendrick while investigating the Fifth Column and assigns Erica to look into the Fifth Column as well. As colleagues, Malik and Erica do not seem to function on the same level, and Malik lacks an emotional inclination to anything she is presented with.

Later, she is found to be a V as she manipulates evidence of the shuttle attack by the Fifth Column. The evidence showed that the bones of the human remains found at the crash site were smooth (bones from a skeleton stay smooth in a fire while bones crack when burned in the flesh). Kendrick then sent Malik up to the New York Mothership where she presented Anna with information regarding her position within the FBI. She stated that she would be able to search and eliminate the Fifth Column with the U.S. government now backing her through her covert position in the FBI.

In Laid Bare, Malik clues on that Erica is a Fifth Colunmist and so to protect herself and Tyler, Erica captures her and brings her back to the Fifth Column Base. While being skinned by Hobbs and Nichols, Malik eventually reveals information about the abduction of certain humans for experimentation, specifically a girl named Sophie Allen. After pleading that she knows nothing of what the Vs did to Tyler while Evans was pregnant with him, Hobbs injects her with a sedative to allow her to die peacefully. Immediately before dying Malik reveals her own human emotion. Anna meanwhile is suspicious about Malik's status of missing. She sends Ryan to find out. The Fifth Column show Chad Sarita's body to prove what the Visitors look like underneath their human skin.

Retrieved from "https://v.fandom.com/wiki/Sarita_Malik?oldid=13408"
Community content is available under CC-BY-SA unless otherwise noted.