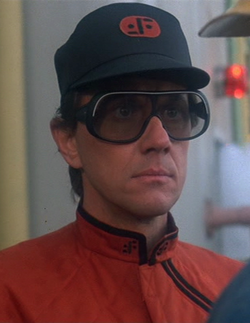 Name
Steven
Series
V: The Original Miniseries
V: The Final Battle
Species
Visitor
Status
Deceased
Profession
Chief of Security
Family
Unknown
Portrayed by
Andrew Prine
Steven, played by Andrew Prine, is introduced in V The Original Miniseries. He is the security chief on board Diana's ship in Los Angeles. He establishes a relationship with Eleanor Dupres that he puts to use by bringing her into the fold as a collaborator and obtains information he feels is useful to his job. He engages in a power struggle with Diana. They differ in how they wish to handle the unexpected resilience of the Resistance. He guards the Los Angeles Medical Center, with Brian as his second in command; when John is unmasked, Steven leads a group of shocktroops to stop the resistance but fails to kill or capture any of them. However he does help in the capture of Juliet Parrish, and observes her in the conversion chamber. Steven also survives the fake Mike Donovan attack because of Jake. Later Steven kills Eleanor by shooting her in the back when she attempts to flee the Visitor Security Headquarters, and is himself killed by Ham Tyler who dumps a mass of red dust on his face and leaves him to die.
Retrieved from "https://v.fandom.com/wiki/Steven?oldid=14550"
Community content is available under CC-BY-SA unless otherwise noted.