There Is No Normal Anymore

Edit
"There Is No Normal Anymore" 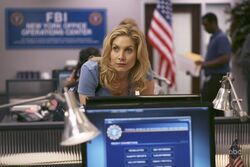 Erica and Jack are still discussing The Visitors when a Visitor Shuttle flies over to the warehouse where the Resistance meeting was held previously. Erica and Jack run after it and witness the Visitors taking all the bodies from the warehouse. Erica calls 911 from the call-box beside her and tells them to come immediately. A Seeker then arrives and photographs Erica and Jack. It then chases them both down the pier. Just as it is about to shoot Erica, she smashes it with a pipe. Erica tells Jack to go home and pretend that nothing happened. She tells him to trust nobody and she leaves for home.

When Erica arrives home, she goes to Tyler's room. His room is empty but she hears glass breaking downstairs. She grabs a bat and walks downstairs. She is about to hit the figure with the bat but it is Tyler. She asks him where he was and he says he was with Brandon all night. She then asks him to promise her that he will never get involved with the Vs. Tyler agrees but goes up to his bedroom and hides his Peace Ambassador uniform under his mattress.

The next morning, Sarita Malik of the FBI visits Jack, following up on the stabbed victim that contacted Jack. Jack at first denies that the victim mentioned the Visitors.

Paul asks Erica to come into work, explaining that Dale is missing. While being interrogated by a panel, the meeting is interrupted by the news that Dale's car is found. Paul grows suspicious when Erica visibly recognizes the address. Erica surreptitiously retrieves her badge and gun from Dale's car, as well as his cell phone. Later, upon her return to the station, Erica runs into Jack, who decided to come clean and meet with Sarita, even providing her with the photos that the dying man had given him.

Paul confronts Erica with a tape of her 911 call. She offers that, since she suspected a mole, she needed to track Dale, and call for backup via alternate means, to avoid blowing his cover if he was legitimate. Later, Erica visits Dale's wife, Joselyn, who provided Erica with phone records from his personal cell phone. These records had two frequently-called numbers, one for her, and another. Erica shows Paul that the number Dale was calling corresponded to the times the cell they were tracking was tipped off, confirming that he's the traitor. Later, she steals from the Visitor Threat Assessment Joint Task Force, a list of everyone who has contacted them regarding aliens or Visitors. Jack and Erica express the opportunity to recruit from this list.

Reviewing poll numbers that show the Visitors' approval at about fifty percent, Chad expresses dismay that his reporting hasn't been adequate to inform the public. He devises a plan to encourage Anna to seek him. He invites two guests, Harold Stern and Marion Geiger to debate the presence of the Visitors, irking Anna. The plan works, producing an uptick in the poll, and paving the way for diplomatic relations between the Vs and the United States. Anna phones Chad and tersely thanks him after the announcement.

Tyler disobeys his mother, meeting with the Vs in uniform, and bringing Brandon along, getting him preferential treatment in the recruitment process. Later, while Tyler and Lisa review photos of his bike on his phone, Brandon, now in uniform, is harassed by protesters outside the Visitors' Embassy. Tyler confronts and assaults the heckler, to Lisa's visible distress. Lisa reveals that the Counsel wants him kicked from the Program.

During the previous night's attack, the Vs captured a human alive. Reviewing the data from the seeker, the Vs attempt to extract identities of the Resistance, either from video, or by torturing their prisoner. The video offers little, and while the prisoner is subjected to horrifying hallucinations, he's unable to provide any information either.

Ryan seeks a old acquaintance, Angelo, for medical attention and to find recruits to the Resistance. Angelo, cautious, renders aid, advice, and a drug, knocking Ryan unconscious. Later, Angelo exposes Ryan's vulnerability by revealing details about his fiancee. Back at home, Valerie notices a framed picture placed upside-down. Righting it, a business card with the name, Cyrus, and an address falls out. Ryan claims to have known the guy, but provides no details.

Dale is reanimated, and his gaping head wound had been repaired to a mildly gruesome scar.