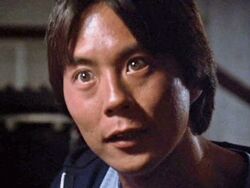 Name
Tony Leonetti
Series
V:The Original Miniseries
Species
Human
Status
Deceased
Profession
sound man
Family
Fran Leonetti-Wife (alive)
Portrayed by
Evan C. Kim
Husband to Fran Leonetti, Tony was with Mike Donovan as his sound-man in El Salvador covering a guerrilla war when the Visitors first arrived. Tony and Mike quickly got back to L.A. with their footage and soon enough they became higher-ups, covering their story with Kristine Walsh. He continued to cover the Visitors with Donovan, although he became suspicious, especially after the scientist conspiracy theories came out.

It was Tony that first noticed a discrepancy in the individuals who were either accusing people or admitting involvement in the conspiracy. In particular, he noted that Jacques Duvivier signed his letter of confession with his left hand; he noted the same with Maurice Jankowski. Pulling previous tapes, he noted that they were both right handed. He agreed to go to the mothership with Donovan, but tripped over a pipe and didn't make it into the squad vehicle.

Upon Donovan's return, Tony got the tape ready for a news break-in when the Visitors marshaled the airwaves. Pretty soon after the Visitors invaded the studio he gave Donovan the tape and flipped over a sound machine to cover his and Donovan's escape. Tony then waited for Donovan to call, talking in code as the Visitors tapped the phones.

Tony agreed to meet Donovan and brought his wife, who was to take Josh Brooks, a lone kid survivor from a raid on San Pedro where the Visitors took the whole town in. Tony and Donovan went to sneak aboard the mothership, but this time they got caught and Tony got killed by Diana, who authorized medical experiments on him.

Retrieved from "https://v.fandom.com/wiki/Tony_Leonetti?oldid=14568"
Community content is available under CC-BY-SA unless otherwise noted.