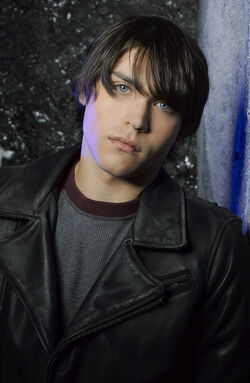 Tyler Evans was Erica Evans’ 18-year-old son. He, along with Lisa and Ryan Nichols, can be considered the secondary protagonists of the series. His father abandoned him and his mother a year ago and since then he’s been headed down the wrong path. He and friend Brandon are captivated by the V’s when they arrive. The Visitors eventually provide Tyler with a chance to re-direct his wayward behavior, into something seemingly more positive. In reality, it’s anything but...

Tyler is recruited by Lisa to be a Peace Ambassador. Being a minor, Tyler forges his mother's name on the required permission document.

The night before the Visitors arrive, Brandon and Tyler crash a party in Soho and get into a fight. They spend the night in a clinic. When the Visitors arrive, Tyler goes to find his mother, Erica, while Brandon says that he isn't going anywhere. The next day they watch an interview with Anna on television with Erica.

Three weeks later, Brandon gets tickets to go to the mothership and brings Tyler with him. The two stare in awe as they are brought up to it via a smaller space craft. Lisa introduces herself to them when they arrive and encourages them to join the Peace Ambassador Program but Tyler says he can't because his mother wouldn't allow him. After a fight with his mother about tagging school property, Tyler forges his mother's signature and joins the Peace Ambassador Program. ("Pilot")

Tyler later flirts with Lisa, telling her about a great place for pizza and offering to show her around New York when they get their visas. Tyler's membership in the program is threatened by his promise to his mother to stay away, and also when he punches a heckling protester while wearing his jacket. Lisa tells him he's been kicked out of the program.("There Is No Normal Anymore")

After awkwardly meeting Father Jack, Tyler drops Brandon off at the Peace Ambassador Center. Brandon asks him if Lisa could do something to help but Tyler says he doesn't want to get her into any more trouble and rides away, narrowly missing his mother who was arriving to foil an assassination plot against the Vs.

Tyler later meets Brandon at the pizza place to find Lisa waiting for him. Brandon tells him he'll see him later and leaves them alone. Lisa tells him that he's back in the ambassador program, he asks if she came all the way out there to tell him that. She responds by saying that "someone" told her this place had the best pizza in town.

Tyler later takes Lisa home and they start kissing in his room. When things are just starting to heat up Erica arrives home. Tyler tells Lisa to stay put and strips off his uniform and shirt, telling her his mother doesn't like the Vs. He meets his mother in the hallway. When a noise comes from Tyler's room Erica asks him suspiciously if he has company over. He unconvincingly tells her no and she barges into his room, to find Lisa standing in her underwear. Erica shoots Tyler a dirty look and tells him to take her home and they'll have a discussion later. Lisa tells Tyler she thought this would be easier to explain than if she were wearing her uniform, Tyler smiles back. ("A Bright New Day")

The next day, Tyler tries to tell his mom about Lisa but she's distracted by first looking up information on Ryan in the FBI database, then talking to Ryan on the phone, so he leaves the house in a huff.

He later meets his therapist, Valerie Stevens, and discusses the Vs. He tells her that they are wonderful but his mom can't see it because she won't even talk to one. He tells Valerie how he met a girl but can't talk to his mom about it, or the fact that he's a peace ambassador. He tells her that he's glad he'll be eighteen in a month and out of his mother's life. Valerie tells him she'll still be his mother. Tyler says she hasn't felt like his mother in a long time. He talks about the Healing Centers and helps Valerie get a rush appointment.

Lisa later invites him up to the mothership to meet her mother. He asks if he's in trouble, because if it were his mom he'd be in trouble. Lisa tells him her mom isn't like that. He sees Anna. Lisa reveals Anna is her mom. Anna offers to give Tyler a tour, so she can get to know him better. She tells Tyler that Lisa is "quite taken with you." Tyler tells her he fells the same about Lisa. Anna tells him she's glad he feels the same way. Lisa's happiness is very important to her, as "it's universal instinct for mothers to be protective of their young."

Anna inquires about Tyler's motorcycle. He tells her he just likes machines. She tells him he should enjoy this and shows him the Mothership's Engine Room, revealing he is the first human to ever see it. Tyler later reunites with Lisa and kisses her after the Vs receive bliss. His mother later learns on his computer that he was invited to the mothership and calls him, but he ignores her. He stares out at the view from the mothership's bridge with Lisa and Anna, saying it must be incredible to see space from the ship. Lisa holds his hand and Anna says one day he very well might, for what he had seen was only the beginning. ("It's Only the Beginning")

Tyler has begun to live on the Visitor New York mothership as part of the Live Aboard program. Tyler lacks a considerable portion of normal human DNA, and that the Visitors' plan is to add genes from other members of the Live Aboard program, as part of their breeding program and genetic evolution. While on board the New York mothership, he is undergoing flying training, to fly the Visitor shuttle craft. Anna's original intent is to let Tyler breed with Lisa, but Tyler's body seems to have resisted the increases in phosphorus due to Red Rain, making him less useful to Anna and her plans. ("Red Rain")

After his father's death in Siege, Tyler becomes emotionally distant, even to Lisa and blames the Fifth Column for the death. He is more attached to Anna and the Visitors than ever before, not knowing their sinister plans for him. He later saw Lisa kissing Rafael and pushed him and got into a fight. The fight only stopped when Rafael collapsed. Even though Tyler's first appearance with him ended badly, he hoped Rafael would be alright, and also saying that everything he did, he did for her, leaving Lisa in guilt.("Uneasy Lies the Head") in the next episode he wants to have dinner with his mom however he is unable to because Anna gives him Bliss. ("Devil in a Blue Dress").

Tyler was away on a shuttle mission during the Fifth Column's failed attempt to kill Anna. His mother called him and revealed the truth about the Visitors, but Tyler refused to leave the ship until he spoke to Lisa. Lisa assured him that he was being misled and proceeded to seduce him. Unfortunately for Tyler, it was not Lisa, but her newly-hatched sister, wearing skin identical to Lisa's, that he was making love to. When they were finished, the Lisa double killed him, as the real Lisa screamed in anguish from her cell. ("Mother's Day")