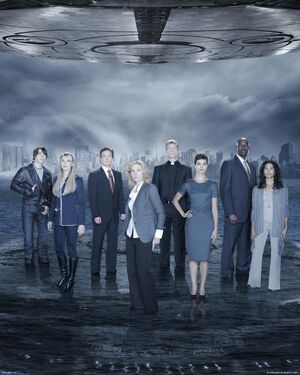 V is a re-imagining of the 1980's television series, airing on ABC. The series premiere aired on November 3, 2009.

On May 13, 2011, ABC canceled the series. In response the fan campaign "Project Alice" was reported to be petitioning Warner Brothers to renew the series on a different network.

V is a re-imagining of the 1980s series about the world's first encounter with an alien race. Simultaneously appearing over 29 major cities in the world, the Visitors (or V's) promote a message of peace. Through their generous offer to share advanced technology, the V's build a following that may actually hide a more malevolent agenda, one that twists a very deep component of human nature: devotion.

While the world quickly becomes fascinated with the V's and their link to wonders just beyond the reach of human understanding, FBI Counterterrorism Agent Erica Evans discovers a secret hidden beneath the skin of every V - a secret that may threaten the lives of everyone close to her. Yet for her teenage son, Tyler, the V's are his ticket to something big and hopeful - a new chance for mankind to unite in common goals. To Chad Decker, a career-hungry news reporter, his exclusive interview with Anna, the leader of the V's, is crucial to his dominating the airwaves. Also unsure about the Visitors is Father Jack Landry, a Catholic priest questioning his faith in the wake of the Visitors' arrival. Seeking answers outside the church, Father Jack, along with Erica, discovers that there are other dissidents who believe the Visitors are not who they say they are, including Ryan Nichols, who is faced with his own life-altering decision when the V's show up. Never has there been more at stake - it truly is the dawning of a new day.