The concept was revived in 2009 when a re-imagined series aired. This was followed by an ongoing series starring Elizabeth Mitchell, Morris Chestnut, Joel Gretsch, Charles Mesure, Logan Huffman, Lourdes Benedicto, Laura Vandervoort, Morena Baccarin and Scott Wolf. The revival was cancelled in May 2011 after two seasons and 22 episodes. 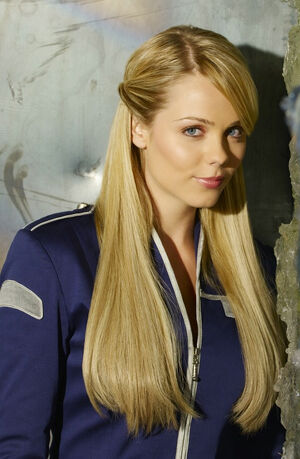 Lisa is a beautiful Visitor Guide aboard the New York Mothership, who greets and charms Tyler (who is immediately entranced by her) and Brandon upon their arrival. Lisa is the leader of the New York's Chapter of the Peace Ambassador Program. She is Anna's daughter and also a member of The Fifth Column. [keep reading]

I am waiting for season 3 of V. What happens to Lisa. So her boyfriend is dead what happens to his mother when she finds out will they simply put an alien who looks like him to play his role. What ha…

Morena Baccarin Returns to The Mentalist

If you miss watching the stunning yet evil Morena Baccarin on a regular basis, you may be pleased to hear that she's returning to The Mentalist as sexy murder suspect Erica Flynn, and one of the few …

On V's official Facebook page, one of the show's producers, Steve Pearlman, wrote: “Despite what you read online, the ratings for V have been OK and the show has a chance of being renewed for a third…

Retrieved from "https://v.fandom.com/wiki/V_Wiki?oldid=13455"
Community content is available under CC-BY-SA unless otherwise noted.