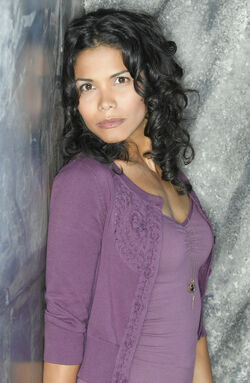 Dr. Valerie Stevens (1974-2010) was a dedicated psychologist, who was in love with mystery man Ryan Nichols. She found her once rock-solid relationship with Ryan on shaky ground when his behavior took an odd turn following the arrival of the Visitors.

When the Visitors arrive Valerie is in shock and tries to stop her bookcase from falling as the ground shakes beneath her. She calls her boyfriend Ryan numerous times to get him to return home. When he does the two kiss. In the following weeks, Valerie becomes suspicious of Ryan after he receives and ignores many phone calls that he brushes off as "nobody" at lunch. Suspicious, Valerie searches Ryan's home for evidence of his infidelity, and discovers the ring he intends on presenting to her as he proposes. When Ryan arrives home, intending to break up with her, she sobs and hugs him and he tells her he loves her more than she will ever know. ("Pilot")

While counseling Tyler Evans, he reveals to Valerie that he can assist in giving her priority to visit one of the Visitors' Healing Centers. Suspicious that her medication for her heart condition is causing drowsiness, Valerie learns that, not only can the Vs correct her malady rather than prescribing a new medication, but that her drowsiness was caused by her pregnancy. Her cravings include rat, and she still does not know that the baby will be half alien. ("It's Only the Beginning")

In "Red Sky", Val is kidnapped by the Visitors, and delivers the baby aboard the New York Mothership. To the surprise of the V medics, both Valerie and the baby are perfectly healthy. Anna, however, injected a fatal chemical into Valerie, killing her. Anna later told Ryan that Val had died in childbirth. She was buried on Earth with her parents being estranged from Ryan. They blame her death on him.(Serpent's Tooth)

[VALERIE STEVENS] 42 years old, Latina/African-American/Caucasian/any ethnicity to be considered. Valerie is the mother of Amy; she's Ryan Nichols' girlfriend, and he's on the verge of proposing to her...